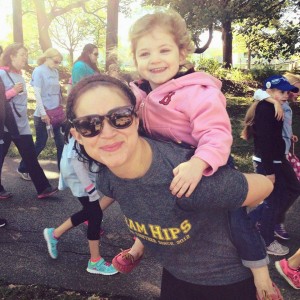 Social media is great for a lot of things — reconnecting with old friends, finding that next job, catching up on the news and perhaps even wasting a little (a lot of!) time. But when Anna Legassie logged on back in May, she wasn’t doing any of those things. She was just trying to get her medicine.

From Excitement to Disappointment

Anna, now 31 years old, was diagnosed with systemic juvenile rheumatoid arthritis (JRA) when she was 11 years old. She has endured six hip surgeries, multiple hospital stays and a constantly changing cocktail of medications to keep her arthritis at bay. After a particularly difficult spring suffering through the side effects of methotrexate, she and her doctor decided to decided to try Orencia (abatacept), a biologic drug that she would would receive by infusion every four weeks. Anna had tried most of the other biologic drugs on the market. None of them had been a fit for her.

“Back on May 21, I left my rheumatologist’s office on cloud nine,” says Anna. “I was feeling pretty excited to start Orencia as soon as possible.”

A few days later, excitement turned to disappointment when Anna received a call from her doctor’s assistant. Anna’s insurance company had denied her request for Orencia due to their requirement for step therapy, a benefit management tool that requires patients to try and fail other similar medications within a 130-day timespan before approving the prescribed medication. They provided Anna with two options for therapy — both injectables, which have caused Anna severe injection site reactions in the past. To make matters worse, Anna had already failed one of the medications before — just not within the required 130-day timeframe.

“I was completely and utterly defeated,” says Anna.

Anna spent the next hour on the phone trying to launch the appeal process with a representative with her insurance company, but she hung up feeling even more frustrated.

“I couldn’t even get a definitive timeline on the appeals process,” says Anna. “It seemed like it was going to take weeks and weeks. Mentally and emotionally, that was not time I had.”

After taking a deep breath, Anna logged into Facebook and bared her soul to her family and friends in a long post. She talked both about her arthritis and also the time, energy and resources it often takes just to get the proper care. Sharing so openly on social media wasn’t typically Anna’s style, but because of her role as an advocate and ambassador for the Arthritis Foundation, she felt called to tell her story.

“What followed was a huge outpouring of support, but also of encouragement to tell my story to the people who needed to hear it most — my insurance company,” says Anna.

Anna had attended a social media how-to class at the Arthritis Foundation’s Advocacy Summit in Washington D.C. this past March, and she knew that social media could be a powerful and very public advocacy tool. Immediately following the Advocacy Summit, Anna opened a Twitter account to connect with everyone she met at the Summit, as well as other young people with arthritis. This meant she had a pretty big group of followers who would have her back. She put on her strategic thinking cap and began drafting tweets and Facebook posts that she planned to use to contact her insurance company. As it turns out, she wouldn’t even need to use all of them. 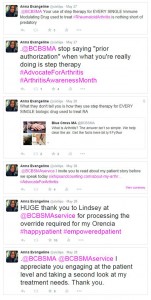 “I only sent five tweets in total, plus two Facebook posts,” says Anna. “Just those few posts started to generate a conversation among my followers as we tweeted our experiences to one another. Person after person retweeted my tweets, as well as parts of our emotionally charged conversations. By 10:00 a.m. on May 28, my insurance company responded.”

The insurance company reached out to Anna through direct message on Twitter asking how they could reach her. When she responded with her phone number, she also included a link to her personal story on her blog, Six Hips and Counting.

“I wanted to give them the opportunity to get to know me as a person,” says Anna. “Personal stories are very powerful, and it was important to me for them to know the person that they were hurting with their protocol.”

Just three hours later, Anna’s insurance company let her know that they would overturn their original decision and that she would be able to proceed with Orencia. Anna spent the next few weeks going back to the doctor to get the prescription resubmitted and calling the insurance company multiple times to get it processed, approved and shipped to the pharmacy.

“Even after approval, it still took a long time from the time I got word from the insurance company to the time I actually got my first infusion,” says Anna. “But for me, knowing that I am moving forward and making progress is enough to put me in a better place emotionally and to be able to roll with whatever might come my way.” 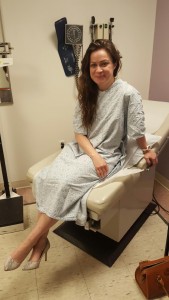 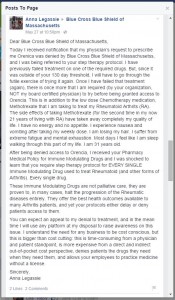 As Anna looks forward to her second infusion in a week, her hope is that her story will benefit others, too.

“Something like this is bigger than me and whether or not I get my Orencia,” says Anna. “It raises awareness so that people outside the chronic illness community know that these policies exist. It shows people that the Arthritis Foundation and other organizations are working to change these policies. Most importantly, I hope that other patients will learn from my experience and empower themselves to advocate on their own behalf in the future.” 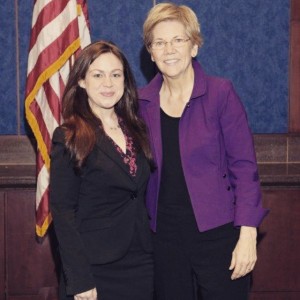 5 thoughts on “When Failure Isn’t an Option”