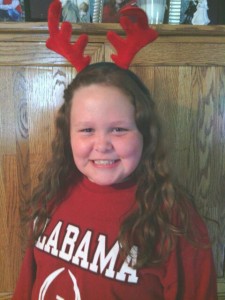 Diagnosed with juvenile rheumatoid arthritis (JRA) when she was four years old, Graci has endured multiple lab tests, biopsies, injections and medications. In spite of all that, she has often remained — in her mom’s words — outgoing, funny, athletic and honest. But during a particularly bad flare when she was seven years old, her parents saw a drastic change in their daughter.

“Graci’s knee, ankle and hip flared up, and she found herself struggling to walk and keep up with her classmates,” recalls Anna, Graci’s mother. “This left her in a wheelchair for a period of time. We could see her spirit starting to fade, and we could see her slipping into depression.”

Graci’s parents knew they needed to step in, but struggled with how they could help her. So they asked her.

“When we asked Graci how we could help, she asked us if she was the only kid with JRA,” says Anna. “I knew there were others, and so we started searching. This is when Graci’s journey truly began.”

In 2012, Graci’s parents’ search for other children with JA led them to the Arthritis Foundation in St. Louis. They quickly threw themselves into the Jingle Bell Run/Walk for Arthritis in Columbia, MO. They named their team Go, Go, Go Graci and sold jingle bells and t-shirts. In just her first year participating, Graci earned the number two spot in fundraising, collecting nearly $3,000. The next year, she served as the 2013 Youth Honoree for the Jingle Bell Run/Walk in Columbia, MO.

“This was a huge year for Graci, and it was such a great honor for her,” says Anna.

After such a positive experience at the Jingle Bell Run/Walk, Graci was bitten by the fundraising bug. She has since raised funds for the Arthritis Foundation through her Go, Go, Go Graci kickball and volleyball tournaments, a can drive and Arthritis Day at a St. Louis Cardinals game. In 2014, Graci’s fundraising total hit $6,062, earning her the top spot in team and individual fundraising. Over the last three years, Graci has raised nearly $15,000. 2015 promises to be a banner fundraising year because in February 2015, Graci found out that she was chosen as the  2015 National Youth Honoree for Jingle Bell Run/Walk.

“When I found out I was the National Youth Honoree for Jingle Bell Run/Walk, I was at school,” says Graci. “My friends kept saying, ‘Good job, Graci. You’re amazing!’ It was awesome.”

As part of her honoree role, Graci attended the Juvenile Arthritis Conference last month. She also has made appearances at events to spread awareness of arthritis and to advocate for children living with arthritis.

“Graci is only 10 years old, but she personally is passionate about finding a cure for arthritis,” says Donna Henderson, special events director at the Arthritis Foundation in Eastern Missouri. “Graci has a personality that shines, and everyone in the community loves to help her. Anna has shown Graci how to take a bad situation and turn it into something good by helping others.”

While Graci is now in full remission without medications, the Diggs family doesn’t see that as a reason to back off on their fundraising any time soon.

“We know that remission doesn’t happen very often, but we are very thankful for every good day she gets,” says Anna. “I actually keep her old methotrexate in the refrigerator, only as a reminder to keep us focused and moving forward on our fundraising and support of the Arthritis Foundation.”

Find a Jingle Bell Run/Walk for Arthritis near you.