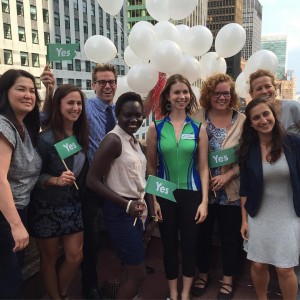 And, they’re off! This morning, Jen and her partner Keegan took off from Queens, N.Y. on their 1,400 mile tandem bike ride down the east coast. Their journey will take them to the Juvenile Arthritis Conference in Orlando. While Jen admits that the next 17 days are going to be quite the journey, at the forefront of her mind as the miles pass will be the 300,000 children who are on a journey of a different kind — juvenile arthritis (JA).

Diagnosed with JA when before she was even one year old, Jen has made a lot of friends in the JA community. There’s the 14-year-old who is a circus performer in spite of multiple jaw surgeries. There’s the friend who just celebrated her 21st birthday in the hospital due to complications from her JA. There’s the artist and cook extraordinaire who is dealing with severe uveitis. There’s the nine-year-old who’s already a well-seasoned arthritis advocate. There’s the team of brothers who both have JA, but still goof around just like all brothers do.

“This ride isn’t about me,” says Jen. “It’s about honoring all of the awesome children and young adults who are doing amazing things everyday in spite of having JA. They’re my inspiration.”

While Jen is excited for the days to come, having lived with the unpredictability of JA most of her life has taught her to prepare for anything and to expect the unexpected.

“I don’t want to give the impression that JA is a piece of cake to deal with by going on this bike ride,” says Jen. “I have all kinds of concerns that typically healthy people just don’t have. I am not a pessimist, but it’s a reality for people with this disease to have to constantly take inventory of our bodies and decide what we can handle. I am riding and raising awareness because children deserve to have a life without the constant internal dialog of wondering if they can do even the simplest activity.”

Like most people with JA, Jen admits that there are times when the pain, fatigue and uncertainty gets to her. Those feelings were especially difficult to process as a child. She recalls one Halloween when she and her friends were all dressed up for trick or treating. As the group took off into a run, she couldn’t keep up. According to Jen, experiences like these are all too common for children with JA.

“The maturity level that children with JA have is astounding,” says Jen. “It’s not easy as a child to already have to make negotiations in life. We find out some of what it’s like to be an adult at a very young age.”

As she traverses the coast to the JA conference, Jen’s hope is that she can encourage the children and families she meets along the way and at the conference to keep saying Yes.

“People have called me crazy for going on this bike ride to the south during one of the hottest months of the year,” says Jen. “Maybe I am, but there is going to be something so special about ending up at the JA Conference. The conference has given so much to me. To be able to roll up and show the families there that they don’t need to fear the worst will be awesome. I want them to know that they can still take amazing journeys in life.”

You can follow along on their journey on their blog or on Facebook. You also can donate to their cause here. All proceeds benefit the Arthritis Foundation and their mission to conquer everyday battles through life-changing information and resources, access to optimal care, advancements in science and community connections.

Stay tuned as we follow them on their way!