Since age 7, Iris Jordan has been living and thriving with polyarticular juvenile idiopathic arthritis, along with other medical conditions that were diagnosed when she was 9: Ehlers-Danlos hypermobility syndrome and pain amplification syndrome. Now 15 and a high school sophomore, Iris endures what most teens can’t even imagine. Yet despite her daily challenges, she has exceptional tenacity, pursuing the things that give her joy while navigating unpredictable pain and fatigue. END_OF_DOCUMENT_TOKEN_TO_BE_REPLACED

If you’re a runner AND a parent, we’ve got the ideal opportunity for you to let off some steam, keep the kids entertained and do good for a great cause – Jingle Bell Run! Here are six reasons why it’s the perfect run for you and the kids.

END_OF_DOCUMENT_TOKEN_TO_BE_REPLACED

The Jingle Bell Run is one of the most spirited fun runs in the nation! This fun, festive, holiday-themed 5K is the perfect excuse to get in the spirit during the holiday season – and, even better, 100% of your registration fees and fundraising help support a great cause!

If you’re still on the fence about whether or not to register this season, give these five reasons a try – and then listen to what our community has to say!

END_OF_DOCUMENT_TOKEN_TO_BE_REPLACED 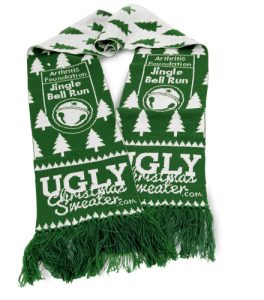 2016 marks the second year the Arthritis Foundation and UglyChristmasSweater.com, one of the top sellers of silly and unique holiday sweaters and apparel, have partnered to provide a limited edition prize for our top team captains. Because Jingle Bell Run participants are known for their holiday flair and costumes, it’s only natural that the Arthritis Foundation and UglyChristmasSweater.com team up to boost the holiday spirit — and the spirit of competition! While everyone can shop UglyChristmasSweater.com’s huge selection of light up sweaters, festive leggings, funny beanies and more, only team captains with seven or more team members will get to jingle with the exclusive scarf at this year’s Jingle Bell Run!

Don’t delay because quantities of the special edition scarf are limited. The deadline to recruit team members for your Jingle Bell Run team to be eligible for a scarf is midnight PST on November 1, 2016. Scarves will be mailed to qualifying Team Captains who recruit seven total team members while supplies last.

Thanks to UglyChristmasSweater.com for supporting Jingle Bell Run

On Thursday, May 19, 2016, San Antonio resident Rob Wicall announced his retirement from his longtime position as the Coyote, the popular mascot of the San Antonio Spurs. Approximately three years ago, Rob was diagnosed with ankylosing spondylitis (AS), a type of arthritis that primarily affects the spine and back. While Rob has enjoyed his long tenure with the San Antonio Spurs, he is looking forward to serving in leadership roles throughout the San Antonio community.

“Of course it’s bittersweet, but I am excited to spend game nights with my family, explore some creative projects, and be open to whatever other opportunities present themselves,” said Wicall. “Three years ago I was diagnosed with ankylosing spondylitis, a type of arthritis, and so I am passionate about staying fit and speaking on behalf of arthritis sufferers everywhere.”

During his tenure as the Coyote, he not only donned the costume for games but also provided creative content for in-arena entertainment, and performed all over the world with his unique ability to combine comedy and athleticism. In the coming months, Rob plans on working with the Arthritis Foundation to raise money and bring awareness to arthritis. Wicall has been instrumental in forming the local San Antonio leadership board of the Arthritis Foundation, and will serve as this year’s adult honoree at the 2016 Jingle Bell Run in San Antonio.

“We are very excited to partner with Rob,” said Pat Bodet, Development Director of the Arthritis Foundation’s San Antonio office. “We believe that because of his energy and dedication, he will have a tremendous impact in growing awareness for arthritis and help to raise the funds necessary to find a cure.”