If you have arthritis, chances are your doctor gave you a prescription for an opioid pain medication at some point. Opioids are effective at relieving pain, including post-surgical pain, and for some people who live with chronic pain from arthritis or other conditions, they are one part of managing that condition.

But these potent pain medications have a very challenging underside. The overuse and abuse of opioids claim an estimated 115 American lives every day, 40 percent of them involving prescription medications, according to the Centers for Disease Control and Prevention (CDC). It has become a national epidemic, and insurers, pharmacies, and government agencies are restricting or urging physicians to reduce opioid prescriptions. 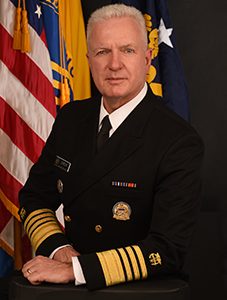 Admiral Brett P. Giroir, MD, assistant secretary for health at the U.S. Department of Health and Human Services (HHS) and senior advisor for opioid policy, spoke recently with Arthritis Today about some of the challenges that people with arthritis face in terms of managing pain and reducing the use of opioids.

On Reducing Opioid Use

A physician with extensive experience in dealing with post-surgical as well as chronic pain, Adm. Giroir (pronounced jeer-WAH) says his agency understands the predicament that many people with chronic pain are in.

“We are very sensitive to people who have chronic pain who are suffering and need solutions,” Adm. Giroir says. “There is nothing we are doing in our guidelines, in our recommendations, in anything that we say that should make people fear or make physicians believe that they need to be off opioids tomorrow, or that they can’t be on the opioids they need until better alternatives exist.”

For those who want to reduce their use of opioids, however, Adm. Giroir says HHS and other agencies are taking measures to help, including grants to support state and community programs.

“HHS has awarded billions of dollars – last year over $1 billion – in opioid-specific grants to states and community-based organizations to assist across the spectrum,” he says. That money, which typically goes to state health departments, is to support prevention and treatment efforts as well as to helping reduce people’s need for opioids. States receive the grants based on “the amount of distress the state is in due to opioids,” he says, and each state has autonomy to decide how those funds can be best spent to serve its constituents.

Another measure is the SUPPORT Act (the Substance Use Disorder Prevention that Promotes Opioid Recovery and Treatment for Patients and Communities Act), comprehensive, bipartisan legislation that was signed into law in October 2018. It supports the expansion of Medicare coverage for non-opioid treatments. “We know that certain things are very important, like exercise and physical therapy, and you will see more activities in this upcoming year that allow reimbursement, or at least bundled payments, for those types of things,” Adm. Giroir says. Other treatments, like acupuncture, are also being reviewed for possible Medicare coverage.

Federal agencies are also supporting research and review of new medications. For example, lofexidine hydrochloride (Lucemyra), which is “specifically indicated for people who are in the withdrawal process,” was approved by the Food and Drug Administration (FDA) in 2018.

People who receive Medicare – about 25 to 33 percent of whom have arthritis, Adm. Giroir says – already have access to a variety of pain treatments that don’t involve opioids. Some are covered nationwide, “like physical therapy, individual and group therapy, behavioral health integration services, psychiatric collaborative care services, nerve stimulation,” he says, while certain states and communities offer additional services.

“You hear about how you can get reimbursed for the physician and the pharmacist, but you can’t get reimbursed for the physical therapist or the transportation that is needed,” he says. Novel delivery models are “more holistic approaches to bundling care,” so health care providers can provide all the services a patient might need without having to bill for them all piecemeal. “You will see more efforts to provide novel delivery models that include all these services,” he adds.

While the FDA is already fast-tracking certain medications, the National Institutes of Health (NIH) and other agencies are focusing on new medications, including those that can treat arthritis and other conditions that create pain.

“If they treat the disease, they improve pain relief,” Adm. Giroir explains. The NIH has “at least a half a billion dollars of new investments every year;” the figure topped $850 million last year.

According to NIH Director Francis Collins, MD, PhD, “there are some exciting new targets that are not opioid-related that could be targeted by small molecules or biologicals,” Adm. Giroir says. “[For example,] resiniferatoxin, a new, non-addictive small molecule derived from plants, was recently tested in humans with moderate to severe osteoarthritis and showed rapid, significant long-lasting relief. This is going into larger studies in 2019.

Researchers also are focusing on the physiologic transition from acute pain, which is limited, to chronic pain,” where it is much more resistant to therapeutics and really changes the biology involved,” Adm. Giroir says.

“I think this is going to be the golden age of pain therapeutics with new targets. It’s not ‘how potent can we make an opioid’ or ‘how long-lasting can we make it,’ but new targets with some pretty exciting results,” he adds.

Biologic drugs are life-changing for some people with inflammatory forms of arthritis and other autoimmune diseases, but they are prohibitively expensive in many cases. Biosimilars – copycat versions of brand-name biologics – are supposed to be more affordable and help drive down the cost of biologics. But although six biosimilars have been approved by the FDA, only two have reached the market, thanks in part to legal disputes and deals between drug makers.

The FDA says it will “continue to address potential barriers to competition,” Adm. Giroir says, “including partnerships with the Federal Trade Commission,” whose mission is protecting consumers and competition by preventing anticompetitive, deceptive and unfair business practices. The FDA’s Biosimilars Action Plan, which was published in July 2018, is intended to spur biosimilar competition in the U.S.

HHS Secretary Alex Azar has been “all over the news” addressing the need to reduce high drug costs, Adm. Giroir says. “The secretary is [promoting] price transparency, like eliminating the kickbacks to the pharmacy benefit managers and passing those savings on to the actual patient. Reduction of high-cost medications is one of the four priorities for the secretary. Lowering the cost of drugs across the board – both by competition and by also eliminating the benefits to the middlemen – can reduce [consumers’] costs by 30 to 40 percent, right off the bat.”

And pressuring pharmaceutical companies to lower costs is starting to pay off, he adds. “I think [in] the area of cost and competition, there could be dramatic changes over the next few years.”

On Reducing Stigma for Patients

Reducing the use of opioids can be difficult, and the stigma attached to their use makes it even thornier. Adm. Giroir recognizes that problem.

“Stigma is the enemy of public health,” he says, citing CDC Director Robert Redfield. “I hear almost daily from patients who are in pain and who are stigmatized, whether they be arthritis patients, patients with sickle cell disease, patients with cancer, patients with deformities. You have our commitment that part of our goal is to destigmatize people in pain who need opioids – [and to] destigmatize everyone really, because people who are addicted, they have a disease as well.”

He is committed to continuing to spread that message, which is included in all HHS publications and presentations, Adm. Giroir says. “My first slide in every talk on opioids is that the majority of patients who misuse opioids do so because of pain, and in every one of my talks I say, ‘You can’t solve the opioid crisis without solving the pain crisis.’ We think these are linked, that they are equally deserving of our efforts.”

Be a Part of the Pain Solution

A task force made up of physicians, patients and federal staffers is working on a plan to improve pain management options and access, and the public has a chance to weigh in on the proposal until April 1, 2019. You can read and comment on the draft report by the Pain Management Best Practices Inter-Agency Task Force, which is overseen by HHS.