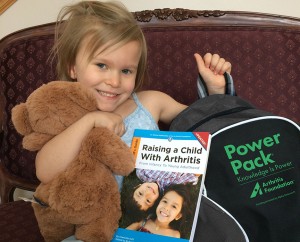 Kids get arthritis, too! And we at the Arthritis Foundation are dedicated to being their champions. According to the Centers for Disease Control and Prevention, an estimated 300,000 children in the U.S. have been diagnosed with juvenile arthritis (JA) and other childhood rheumatic conditions. It’s likely that many more kids are affected by rheumatic diseases and don’t even know it.

We are boldly leading the fight for families living with this mysterious disease. To help them cope, we now offer a unique package of support for young patients and their families.

The Power Pack is a special backpack filled with resources to assist JA families on their journey. There’s a version for younger kids featuring Buddy D. Bear, a hot-cold teddy bear that can help ease pain. A sling-pack version for teens has a fashionable hot-cold wrap offering the same relief.

Sponsored by the Alpha Omicron Pi Foundation with support from Bristol Myers-Squibb and Genentech, the JA Power Pack is making a big difference for kids, teens and their families. So far, approximately 2,000 Power Packs have been distributed.

Six-year-old Kenley Huss thought it was the best thing ever when her Power Pack arrived last summer. “It’s fun to get a package in the mail, but it’s even better when it includes so much useful information,” says her mom, Dongi Huss, of Rosemount, Minn.

Kenley was diagnosed with JA at just 16 months old. “Kenley’s diagnosis was shocking, but the Power Pack has helped us deal with it,” says Dongi. Kenley, who has been in remission for the past year, used her backpack throughout kindergarten.

“At the beginning, children with arthritis and their families often feel overwhelmed and scared,” says Liz Atchison, director of juvenile arthritis family engagement at the Arthritis Foundation. “They’re not sure where to go.

“Our Power Pack brings comfort, along with information and resources that families need most. We’re also helping them connect with other families going through the same thing.”

Ask your rheumatologist how to get the free Power Pack, or visit JApowerpack.org.