This 10-year-old boy from Ohio won’t let arthritis stop him from having fun, because he knows he can handle it.

Even when his juvenile arthritis is acting up and his joints hurt, Greyson Chess just keeps plugging away and rarely complains about his pain. An avid soccer player and skier, this active 10-year-old also enjoys lacrosse, basketball, snowboarding and going to the beach. During spring break earlier this year, he got to travel with his parents and two sisters, Ava and Piper, to Costa Rica. 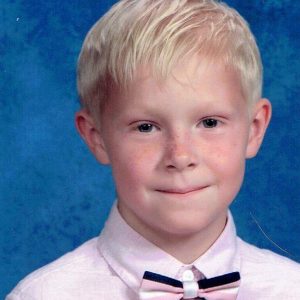 That might all be different if Greyson hadn’t responded so well to the treatment he’s been on since age 4, when he was diagnosed with JA. The first symptoms were extremely red, swollen knees and ankles. He also had trouble climbing stairs and getting out of bed, which was painful for his parents to watch.

They first thought it was from jumping off things, or just running around all the time, like a typical 4-year-old boy. Their pediatrician immediately suspected arthritis and directed them to a specialist at the Cleveland Clinic. “That was kind of shocking to us, because we didn’t know kids get arthritis,” admits his father, Michael.

“It wasn’t easy when he was diagnosed, because there was a lot of uncertainty,” Kristen, Greyson’s mom, says. “From our experience and depending on the severity, it can be a very manageable disease. The medication has been working. For the most part, the JA and meds aren’t limiting his physical ability. No one would know Greyson has arthritis by just looking at him.”

What Will the Future Bring?

Kristen says there are a lot of questions about her son’s future. “We’ve seen people who have grown out of it and others who have it their whole life. You have to realize it could go on for a long time, but it’s manageable so far. My concern is that it doesn’t get worse. That he can continue to be as active as he is now and that it never prevents him for doing the things he loves, because that’s just the kind of kid he is. His fortitude amazes me.”

Besides being treated for his joint disorder, Greyson’s eyes are another concern. It’s not uncommon for JA to also harm the eyes and other organs. When he competed on the freestyle ski team all last winter, his parents proactively told the coaches about his condition.

“We always have that conversation up front, to make sure they’re aware,” says Michael. “We’d say, ‘If he crashes, don’t automatically assume it’s a concussion, because his eyes are going to look strange to you.’ In one eye, his pupil doesn’t dilate. They’re always a little shocked, saying ‘Geez, I wouldn’t have known there was something wrong with him.’”

Greyson’s mom says connecting with other families through the Arthritis Foundation has been a big boost. “You get to meet with so many others and get connected within your community and beyond. It makes you realize that more people are affected by JA than you thought.” Their family has been able to reciprocate and give guidance to other families going down the same path who have reached out to them.

The Chess family is also grateful for the support of family, friends and neighbors in arthritis fundraisers. Since 2014, they’ve raised about $20,000 for Greyson’s Superheroes team at the Arthritis Foundation’s Jingle Bell Run in Cleveland, where he was youth honoree two years ago. On top of that, Greyson held a birthday fundraiser, asking well-wishers to donate to the Arthritis Foundation’s efforts instead of giving him ordinary birthday presents.

To further reciprocate, Greyson aspires to become a doctor who treats the same conditions he has coped with for most of his life. He wants to do his part to help close the gap in the shortage of rheumatologists nationwide, especially in underserved areas.

“I won’t let arthritis slow me down,” Greyson says with conviction. “If I’m being honest, I’ll tell you that arthritis is horrible, and you don’t want to get it. But it doesn’t stop me from having fun. I know I have this challenge because I can handle it.”

About his involvement with the arthritis community, he adds: “I couldn’t do this on my own. It’s nice to know I don’t have to.”