Going off to college can be a tough transition for anyone. But if you’re a teen with arthritis, starting college can pose unique challenges: leaving behind family and friends who understand and support your health needs, navigating campus on foot when every step causes pain, watching roommates go out at night when you need sleep just to function and feeling like you’re the only young person in the world with a disease associated with old age.

Rachel Mershon and Caroline Bailey know the feeling all too well. Diagnosed with arthritis at age 14, Mershon left home for the first time two years ago to pursue a degree in nutrition at Cal Poly, San Luis Obispo. Bailey was diagnosed with ankylosing spondylitis just months before the start of her freshman year at the University of Mississippi. Both young women say the transition to college life was a difficult – and lonely at times.

“No one I knew was experiencing the same feelings and pains I did,” says Mershon.

“I definitely felt alone at times dealing with starting college and my disease,” says Bailey. “I didn’t know anyone else my age or younger, who had arthritis, so I did not have anyone to talk to about it.”

Like many students, Mershon and Bailey immersed themselves in campus life by joining a fraternity. Both chose Alpha Omicron Pi Fraternity and Foundation (AOII) because it supported Arthritis Foundation initiatives, such as Jingle Bell Run, JA camps and conferences, Strike Out Arthritis! and the Walk to Cure Arthritis (Mershon herself planned the 2018 walk in San Luis Obispo). Next fall, the women’s fraternity will partner with the Arthritis Foundation to introduce a program for students with arthritis– one Mershon and Bailey say could have helped them when they were freshman. 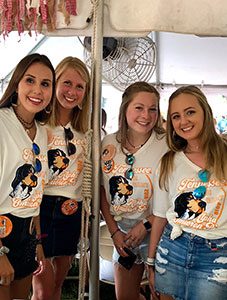 “Welcome to Campus” will begin on a select number of the 144 campuses with AOII chapters in 2019, with plans to expand eventually to all of the fraternity’s U.S. campuses, says Mariellen Sasseen, director of communications for Alpha Omicron Pi International Headquarters in Brentwood, Tennessee.

The goal is to bring other students with arthritis together so they can connect and have a space to support each other through challenges in college, particularly those who may be facing arthritis without their families for the first time, says Sasseen.

“That first semester, even that first whole year, is a huge change for any young person, but for someone with arthritis I think [the program] gives them the opportunity to have a community of people who understand and can help them with issues they are facing,” says Sasseen.

Such issues include explaining their chronic disease to students, friends and professors, even though at times it may seem invisible, and when and how to broach the subject of arthritis with someone they are dating.

“For [AOII] members who don’t have arthritis, it helps them understand how arthritis affects young people and make connections with people their own age with a disease that they fundraise for, she says. “I hope to see some heartfelt connections.”

This academic year, the program is still in the planning stages, says Sasseen. “Much of what happens is still being fleshed out – Is it a once-a-semester gathering? Is it something that is going to happen quarterly? We don’t know the answer yet. That is part of what this year is about, determining what the program will eventually look like.”

Sasseen hopes the program will eventually become a model for college campuses everywhere. More information about the “Welcome to Campus” program will be available in 2019. Students interested in the program can contact Jennifer Ziegler by email at [email protected] or by phone at 470-481-4921.

Regardless of the program specifics, Mershon and Bailey believe it will benefit new students dealing with the same challenges they had as freshmen – being away from home and feeling alone with arthritis. “A program like this would have made a huge difference in my transition to college,” says Bailey. “Having people to connect with about this chronic illness would have been life-changing, because I always felt like I was the only one.”