More than 15,000 doctors, nurses, physical therapists, researchers, scientists and others with interest and/or expertise in rheumatology gathered in Chicago in late October for the American College of Rheumatology’s Annual Meeting. The Arthritis Foundation had a contingent of “patient representatives” attending to  provide the perspective and voice of people living with arthritis. They fanned out to attend sessions, view and present posters and collect information about exciting new developments in the field. Here are their notes from the final sessions of the meeting.

One session that garnered a lot of attention was the “Clinical Cannabinoids Debate: Safety, Dosing and Accessibility,” during which Dr. Alvin Wells, of the Rheumatology and Immunotherapy Center in Franklin, Wisconsin, and Dr. Duane Pearson, from the University of Colorado School of Medicine, debated the pros and cons of the use of cannabinoids – the active compounds in marijuana – among rheumatology patients, with Dr. Wells taking the side in favor and Dr. Pearson against. 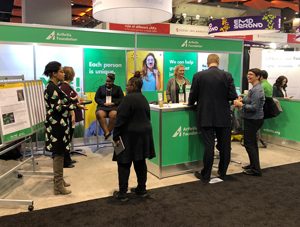 “I found the session intriguing because this is relatively new in treating patients with chronic pain, and there is much more research needed,” says Gary Davenport, a patient representative who attended the session. “What really caught my attention was when Dr. Wells put data on the screen [showing that] in the states where medical marijuana (MMJ) is legal, opioid prescriptions and opioid-related deaths are in decline.

“Dr. Wells went on to say that in the state of Illinois, if you are currently on doctor-prescribed opioids, the state will waive the $300 fee for an MMJ [user’s] license. So, is MMJ simply the lesser of two evils or does it have legitimate potential to become accepted in our society as a government-approved medicine?” he asks.

Another topic of high interest was “Emerging Treatments for OA: Targeting Pain vs Structure.” Dr. Anne-Marie Malfait from Rush University Medical Center in Chicago talked about disease-modifying osteoarthritis (OA) drugs (DMOADs), which could potentially change the course of the disease. “As of 2018 there are no DMOADs on the market. There are several in the testing phase. The process can take years, requiring testing in the lab, in animals and then on humans. Each level must pass muster before it proceeds to the next level,” reports patient representative Donna Dernier. 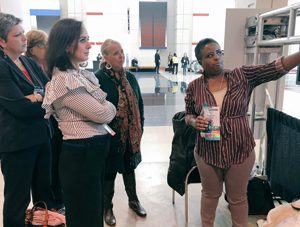 “The second speaker was David Walsh, PhD, from the University of Nottingham in the U.K. He made the point that even if there were disease-modifying drugs available, as with [rheumatoid arthritis] RA, there is still pain. So drugs that work on pain alone are still needed. Some pain drugs in the pipeline block the pain signals from reaching the brain. Other drugs focus on nerve growth factor and blocking those pathways,” says Dernier, adding that more are needed.

Dernier says that the last speaker, David Hunter, PhD, from the University of Sydney, Australia, talked in more depth about a few drugs being tested in humans once the best dosage has been determined. “Drugs can get to this point and still show disappointing results. And this is also when unexpected side effects can be discovered,” she says.

Patient representative Corinne Pinter attended a session called “Pediatric Transition Approaches on Both Sides of the Pond” that explored the transition of patients from pediatric to adult rheumatology treatment. “The adolescents and young adults don’t have the same brain; they are not mini-adults,” says Pinter. “Parents need to be involved, but adolescents and young adults need to learn how to take care of their condition and manage their health.”

A lecture on “Biosimilars: How Do They Affect Patient Care and Safety?” elicited this comment from patient rep Rick Phillips: “Biosimilars can have a negative image, [making] it difficult for patients to accept [them as being] as good as the original. Education is the key to acceptance.” (Read more about biosimilars here.)

Patient Education Around the World 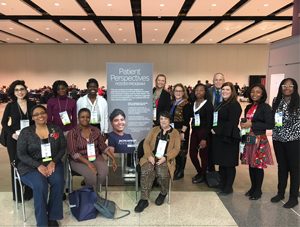 The annual session of the International League of Associations for Rheumatology (ILAR), “Innovative Patient Education to Overcome Patient Barriers,” looked at patient-specific initiatives worldwide in education and awareness.

The first speaker was Dr. Christina Drenkard, from Emory University, who spoke about the need to reach Spanish speaking lupus patients in the United States, because educational materials are often in English. The Let’s Talk about Lupus campaign has been used “mostly on Facebook, and has attractive and friendly videos, online live chats, written information,” reports Dernier.

Dr. Omondi Oyoo, from the University of Nairobi, spoke of patient education initiatives in Africa. “The goal was to create awareness of musculoskeletal health and self-care techniques. They needed to get good information to people in far-flung villages. [Organizers] brought in international teams who trained special patient teams, who then trained regional patient groups… Long term, they need to get an online presence to share information among patients and clinicians.”

Dr. Syed Atiqul Haq, rheumatology professor at Bangabandhu Sheikh Mujib Medical University in Bangladesh, discussed patient education in the Asia Pacific region. “He spoke of the need for patients to buy in to the care offered by health providers. The goal [of the initiatives is] to support patients, help them to adjust to their illness and maintain their quality of life. [Those involved] found that patient education was the single biggest factor in adherence to the medical regimen,” says Dernier.

Lastly, Dr. Johannes Bijlsma, president of the European League Against Rheumatism (EULAR), pointed out that there are over 50 languages used in Europe, “making dissemination of health information difficult. At EULAR, they have online tools for self-management, patient education course information, and standards for volunteers,” says Dernier.

One of the last sessions at the conference was “Psoriasis to Arthritis Transition: Mechanisms, Risk Factors and Interventional Strategies,” in which Dr. Christopher Ritchlin, chief of rheumatology at the University of Rochester in New York, outlined some of the mechanisms involved in the transition from psoriasis, the skin disease, to psoriatic arthritis (PsA), the bodywide disease that affects joints.

Dr. Alexis Ogdie, from the University of Pennsylvania, outlined possible moments of transition from psoriasis to PsA. For example, a patient might start out with certain genetic or physical characteristics linked to PsA, then experience silent inflammation (as measured by certain proteins in the blood), then having achy joints and fatigue – all before changes in joints show up on X-ray. Dr. Ogdie posed the question of whether PsA could be prevented at different points in the continuum.

New York University’s Dr. Jose Scher outlined some of the major risk factors linked to the development of arthritis in psoriasis patients – such as obesity, a family history; “subclinical disease” on MRI or ultrasound; and having scalp or nail psoriasis or very severe psoriasis. He discussed how learning more about the natural history of the disease may lead to additional strategies to either prevent the development of PsA or lessen its severity in patients with psoriasis.