It’s been said that what makes the desert beautiful is that somewhere it hides a well. This week, Arthritis Foundation supporters from around the country descended on Phoenix, Arizona for the 2017 Conference of Champions. And there, they discovered the fountain of generosity through stories of the “best of the best.” The stories told by our most committed volunteers and partners, demonstrating their passion for our purpose. 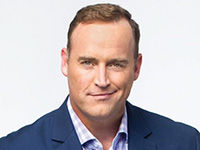 The Evening of Honors ceremony is a highly-anticipated tradition at the Arthritis Foundation, marking its 41st anniversary this year. Thursday evening’s celebration was hosted for the third straight year by comedian and “American Ninja Warrior” host, Matt Iseman, who talked about his own battles with rheumatoid arthritis, as well as his experiences competing on “The New Celebrity Apprentice” at the beginning of 2017. Matt went on to win the contest, beating out entertainer Boy George, and bringing almost $1 million to the fight against arthritis.

“I signed up for ‘Apprentice’ because I wanted to bring this important cause to the forefront,” Matt told the crowd. “There are many causes that deserve people’s attention – and fighting arthritis and related diseases needs to rise higher.” 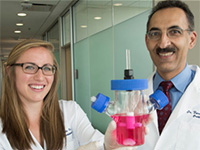 At the start of the award presentations, Matt announced Farshid Guilak, PhD, as the winner of our Lee C. Howley Sr. Prize for Arthritis Scientific Research. This $10,000 prize recognizes the incredible breakthroughs Dr. Guilak has made in orthopedic and osteoarthritis research – studies that have been covered in 25 respected scientific publications since 2016. 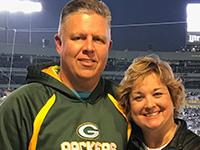 We presented our Champion Award to two dynamic couples who have demonstrated excellence in leadership and their commitment to furthering our mission. Deb and Tim Constien have immersed themselves in volunteer opportunities with the Foundation, advancing arthritis advocacy, fundraising efforts and juvenile arthritis services in Wisconsin and beyond. The Constein family has raised nearly $50,000 through their Walk to Cure Arthritis teams and secured grants for Camp M.A.S.H., doubling the number of kids who can attend by waiving the camp fee. 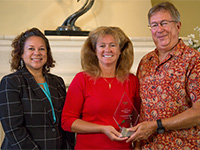 We also honored George and Lisa Schott, who rallied their friends in the Parrot Heads of Central Florida, a social club whose slogan is “Party With a Purpose,” to hold an annual bowling tournament, “Fruitcakes in the Alley,” to benefit the Arthritis Foundation. Over the past nine years, this weekend festival of music, bowling and fun has raised almost $300,000 in memory of George’s daughter, Jenny, who endured more than 20 years of drugs, operations and experimentation until arthritis and its complications took her life at the age of 26. 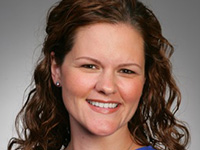 Our Champion Award to Cara Hoffart, DO, salutes her tireless efforts to champion the Arthritis Foundation’s work on behalf of children living with arthritis. At Children’s Mercy Hospital in Kansas City, Missouri, she has been influential in securing their $15,000 annual contribution over the last three years. Dr. Hoffart connects families with Arthritis Foundation events and services, serves on the medical team of Camp Joint Ventures, and has further extended her commitment to support the local Walk to Cure Arthritis and the Art for Arthritis gala.

Our Evening of Honors paid tribute to corporate and organizational partners as well. We spotlighted AbbVie for the Foundation’s Corporate Impact Award, citing the company’s investment of $1.5 million in our work in 2017, and raising the bar in local fundraising events and employee giving. Meijer, a retailer that operates 235 supercenters and grocery stores across the Midwest, received our Champion Award for donating nearly $500,000 over the past decade. And we celebrated 50 years of partnership with Alpha Omicron Pi, the fraternity that supports many of our key initiatives, like the National JA Conference, JA Power Packs, research being done with CARRA and more. As an added bonus, the Independent Order of Odd Fellows and Rebekahs presented their annual gift of nearly $400,000 to the Foundation. 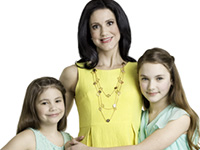 Another highlight of the evening was entertainment from Joy Ross and her daughters, Isabella and Georgianna. The trio harmonized in songs that were thought-provoking and touching. Joy and her family have engaged in the Arthritis Foundation’s efforts to bring greater attention to the debilitating effects this disease has, like the blindness it brought to Joy and now causes concern for her girls. As she pointed out, “Joy is a choice” – and their passion for turning things around came through loud and clear.

Kevin Gadd, new chair of the Classic Auto Show and Cruise-In in Ohio, which has raised more than $2 million for arthritis research and support over the past 35 years, told us why he’s so passionate for our purpose. He honors his mother, Kay Steen, who has battled RA since 1969. In their words, “We have to fight and win.” 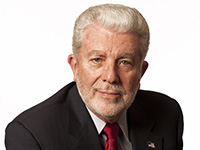 The Evening of Honors ended with our top award: The Charles B. Harding Award for Distinguished Service, named after a revered Foundation leader. The recipient was Daniel T. McGowan, a 20-year Arthritis Foundation veteran volunteer. Dan was an early proponent of putting patients front and center. He was an exceptional unifier as the Arthritis Foundation sought new, groundbreaking direction. By bringing stakeholders together – and through collaboration, inclusion and trust building – Dan helped set the stage for where we are today.

The Evening of Honors, sponsored by Lilly, made us all realize that our efforts are taking us even further in the purpose we’re all passionate about. Those we spotlighted at the Evening of Honors have made an impact on the arthritis community in unique and outstanding ways. We also celebrate the contributions every one of you has made to our mission. Thank you for being part of this phenomenal journey!