Early, aggressive treatment and support from the arthritis community have helped the Rose family take back control.

Carson Rose was only a few months old and learning to crawl when his parents, Chrissy and Jason Rose, noticed something off in his movements. Carson avoided putting weight on his wrist and instead “army crawled” on his elbow on one side, but not the other. In hindsight, they said, this was one of the earliest signs of the polyarticular juvenile idiopathic arthritis (JIA) their son, now 7, would soon be diagnosed with.

“Looking back, this was a red flag that we missed because we didn’t have any idea what we were looking for or what we were dealing with,” says Chrissy. “We didn’t know JIA existed.”

At 10 months, Carson was limping as he learned to walk. His parents — and the first 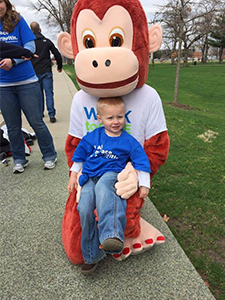 doctors they took him to — thought he had suffered some kind of injury. When time and the prescribed medications failed to heal it, Chrissy and Jason spent a few months as, “the annoying parents at the pediatrics office,” in Chrissy’s words.

They finally did an ANA (antinuclear antibody) test, a blood test used to diagnose JIA and other autoimmune disorders, and were referred to a pediatric rheumatologist.

However, there was an eight-month wait to see their local specialist, so they made the two-hour drive to a regional children’s hospital. There, 13-month-old Carson received an official diagnosis of JIA, as well as a round of corticosteroid injections done under anesthesia to bring his flaring wrist and knee joints under control.

Carson’s doctors followed the joint injections with a prescription for a nonsteroidal anti-inflammatory medication they hoped would control his pain, swelling and other symptoms. The medication didn’t help.

Around this time, the Roses were in the middle of moving to their current home in Indiana. There, new doctors recommended methotrexate, a well-studied and effective treatment for JIA, but one that was originally developed as a cancer drug. Knowing this made the decision tough, says Jason. “I was in some denial at that point. I’d say, ‘Let’s go see another doctor,’ because I wanted different answers.”

But both parents knew they wanted to be aggressive in Carson’s treatment. “When we were faced with the option to start using methotrexate, it was a huge decision, but we decided at the time to be fast and aggressive to try and get a handle on it,” Chrissy says. 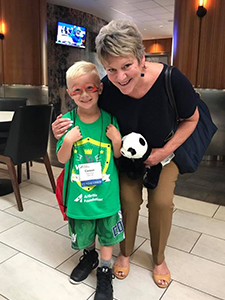 Oral methotrexate upset Carson’s stomach, so they switched to weekly injections of the drug. “It was traumatic for him and for us,” says Jason. But they coped, and Carson began to get better.

After a couple years, his parents and his doctors agreed to try to wean him off medication.

“He hasn’t taken any medication in about two and half years, and at the same time he’s become more and more active in sports. There’s been no looking back, just solid looking forward and living the life of a normal child,” Jason says.

“Early diagnosis and aggressive treatment played a huge part in us being able to get Carson’s JIA under control as quickly as we did,” says Chrissy. The Arthritis Foundation, which Chrissy first connected with when they moved to Indianapolis, has had a major impact on the entire family, including Carson’s 12-year-old sister, Kylee.

The family was still in the early days of Carson’s diagnosis when they relocated to Indianapolis in 2013. “I was googling and reading, and we found an Arthritis Foundation JA family day. We went, and from that point we dove in headfirst and never looked back,” Chrissy says.

Now, the Roses are often found at local and national Arthritis Foundation conferences and work together on fundraising walks and events. Carson’s Crew, the family’s Walk to Cure Arthritis team, has raised more than $30,000 in the last three years to support arthritis research.

Carson, the 2019 National Youth Honoree for Walk to Cure Arthritis, is an outgoing kid who enjoys talking to others about his experience with arthritis.

“He’s gotten better and better at expressing himself,” says Jason. “We made a video for the Arthritis Foundation when he was 3, and Chrissy and I did most of the talking. Now it’s him talking, and that’s been so cool to see. He’s kind of a ham and enjoys the spotlight.”

Carson says he likes teaching people about arthritis. “When they see me, they can learn that even though arthritis hurts your body, it doesn’t stop you from doing things that you like. I can still play baseball and basketball and wrestle.” 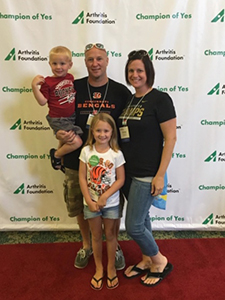 Kylee is also active in Arthritis Foundation events. Her parents are proud of how she has handled having a younger brother with a condition that demands a lot of attention.

“Sometimes, with all the doctor’s appointments and other ways arthritis affects the whole family, it can be frustrating for her,” says Jason. “It’s helped her to go to events and talk to other siblings.”

Kylee acknowledges that having a little brother who sometimes gets all the attention can be hard. More than anything, though, she is proud of him.

“He has been through a lot for being so young,” she says. “I like helping with fundraising and teaching other people about arthritis now that I’m older. I think it’s important to remember that having arthritis isn’t fun, no matter how much attention you get. The more ways you can find to be involved, the better.”

With Carson’s JIA under good control, the Roses are focusing on giving back to the community that has given them so much. Chrissy is a resource for families who are just learning about their child’s JIA, while at National JA Conferences Jason has led dad’s group discussions and used his professional skills as a chef to create nutritional workshops. Kylee contributes fundraising ideas and worked a conference registration booth last year.

“The Arthritis Foundation came into our lives when we couldn’t have needed them more and became a part of the family we didn’t know we’d ever need,” says Chrissy. “Now we’re able to give something back and spread some hope about this disease.”