When Britney Gifford started complaining about aches and inflammation in her arms, legs and knees at the age of 5, her pediatrician assured her parents it was just growing pains — after all, she was one of the tallest kids in her class. As she grew older and showed zero interest in athletics, her parents assumed it was because she just had different hobbies and interests.

By the time Britney was 10, she frequently told her parents about consistent pain in her ankles, knees and wrists. Again, they just believed she was growing and would give her ibuprofen. At 13, after dealing with frequent numbness in her pinky and an inability to hold things in her affected hand, Britney and her parents were desperate to know what was going on. Bloodwork and X-rays were done to rule out cancer or other common causes. After seeing an orthopedist specializing in hands and wrists, she was correctly diagnosed with neurogenic thoracic outlet syndrome (NTOS).

However, that diagnosis was just the beginning. When her bloodwork came back, all of her levels were high in inflammation. Her primary care physician sent her to a pediatric rheumatologist, who diagnosed Britney with juvenile idiopathic arthritis (JIA).

Knowing What Was Going On Was a Big Relief

A correct diagnosis felt amazing to Britney, especially since her chronic pain had long been blamed on growing pains — or she was accused of making up her symptoms for attention. “After you’ve been told for so long, ‘Are you sure you’re not faking it?’, you sometimes start to doubt yourself because everyone says you’re just fine, so it was definitely a relief,” Britney says. 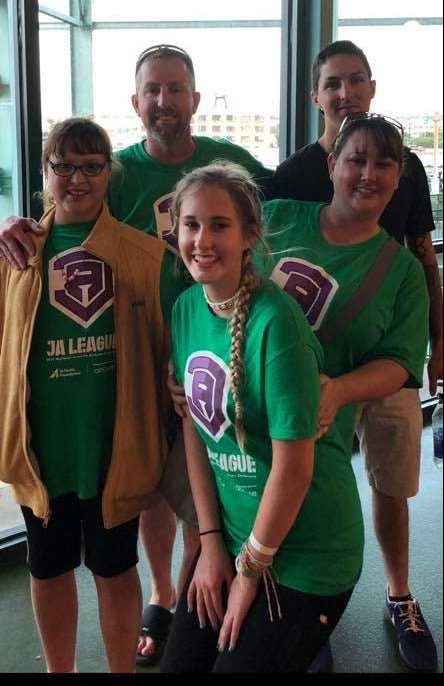 According to her rheumatologist, a case of mononucleosis and a brief bout with human parvovirus she experienced as a child are potentially what triggered the onset of JIA. This is a relatively common occurrence for kids living with JA; unless they’re born with it, it’s typically triggered by an illness or infection.

According to Angela, her mother, Britney is the type of kid who believes knowledge is power. “She wants to be in the know and learn as much as possible about a subject,” her mother says. “After her diagnosis, she went to sites recommended by her doctor and began researching everything she could find to learn more about JIA.” This led Britney to the Arthritis Foundation and Kids Get Arthritis Too resources.

Britney also became active on social media, posting on Instagram and making friends on an app called Musica.ly. One young lady she became friends with also had juvenile arthritis and introduced her to Camp M.A.S.H. (Make Arthritis Stop Hurting) in Mobile, Alabama. Camp M.A.S.H. is a JA camp that partners with the Arthritis Foundation and features a weeklong recreational program for kids ages 7-17 who have a form of JA or related autoimmune disease. 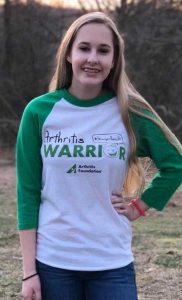 In most cases, Camp M.A.S.H. is only open to kids who live in Alabama and surrounding states. Since the Gifford family lives in Missouri, Britney didn’t technically qualify. But she applied anyway and soon heard back from the camp director. He wanted to make sure they realized the camp was in Alabama.

Once that was clarified, he told them she was more than welcome to attend the upcoming program. Attending Camp M.A.S.H. was a life-changing experience for Britney. For the first time, she was spending time with kids like her who understood what she was going through and were supportive of her limitations.

Britney also learned about the Arthritis Foundation’s National Juvenile Arthritis Conference. Her parents urged her to apply for a conference travel award and agreed to cover the rest of the costs if they got it. When they received the fantastic news they’d been approved, they began planning their trip to Washington, DC, for their first JA Conference. There, Britney was able to make lasting connections, meeting friends she still speaks with regularly; she served as the head teen for her age group.

Getting Involved in the JA Fight Is Key

The Gifford family continued their involvement by attending the next JA Conference in Houston and being honorees for the 2019 Jingle Bell Run in St. Louis; Britney was the youth honoree, and she and her mother were the mother/daughter honorees. Through this, the family as a whole has been able to increase their advocacy and show the positive impact of spreading the word about JA. “My honoree role gave me a bigger platform,” she says. “It’s empowering to share my story with more people.” They are already planning their trip to Orlando for this year’s JA Conference “Family Reunion,” where Britney will be leading the teen subcommittee.

Another way Britney has worked to spread information about JA was putting together a Juvenile Arthritis Cookbook, containing recipes from her and 25 other kids living with JA. She asked them to share their story and favorite recipe. In the next couple of years, they hope to release an updated cookbook including recipes from Britney’s friends outside the U.S. 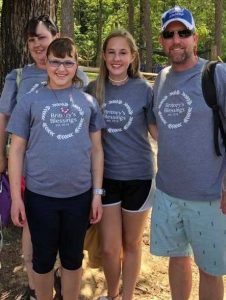 The Giffords also run multiple fundraising and awareness events of their own, including bingo nights, chili cook-offs and a fundraiser they dubbed Flock & Flush Out Juvenile Arthritis. They received donations to either “flock” someone’s yard (cover their lawn with pink flamingos) or “flush” it (placing a bright blue toilet in their front yard). Donors could get the flamingos or toilet removed — or donate to prevent getting “flocked” or “flushed” in the first place!

The ultimate goal for Britney and her family is to get the word out about juvenile arthritis, letting people know kids get arthritis, too, and how serious the disease is. “We’ve experienced firsthand the misinformed ideas people have about arthritis,” Angela says. “Britney has even been told that if she’d eat healthier and exercise, she wouldn’t have arthritis.”

More than anything, the Gifford family is focused on raising awareness and letting people know different ways they can help spread the word about JA. In the fight to find a cure, they are very determined Arthritis Warriors.

March 18, 2020, is World Juvenile Arthritis Day. On this date, we shine a light on JA — raising awareness of a complex group of childhood rheumatic diseases most people don’t know about. Besides affecting joints, juvenile arthritis can also affect the heart, lungs, eyes, skin and muscles. And it often leads to emotional, school and social issues.
The Arthritis Foundation makes JA one of our top priorities, supporting life-changing research and resources — and bringing the JA community together. In many places, there are local support groups to meet other JA families in person. Or you can connect with other parents and caregivers in the Live Yes! Online Community. You can also reach out to a licensed social worker at the Foundation’s Helpline by submitting a question or calling 844-571-HELP (4357).