They said they were going to do it and, by golly, they did it – in record time!

Earlier this year, brothers Tom and Greg Van Volkenburg decided they were going to swim across Lake Erie, a distance of 24.3 miles, in honor of their mom, Debbie, who has battled rheumatoid arthritis (RA) for most of her life.

Watch a video clip of Tom and Greg finishing their swim across Lake Erie.

For most folks, just the idea of swimming across the eleventh largest lake in the world is completely insane. But for Tom and Greg, former college competitive swimmers, it was a challenge they felt was achievable and a great way to pay homage to their mom while raising awareness about arthritis and support for the Arthritis Foundation.

Swimming across Lake Erie is even more difficult than it sounds. You don’t just slip on your speedo and jump into the water. In addition to several months of grueling physical and mental training, the brothers had to get permission from the Canadian and U.S. governments, recruit a village of volunteers who would monitor their swim from kayaks, boats and the shore, arrange for emergency responders to be at the ready, then pick a day that not only had favorable weather conditions, but also was void of cargo ships cruising through the area.

“We had a three week window to find a day that looked good,” explained Greg. “The first week, the water was so cold that we could barely put our toes in. Our swim was sanctioned so wet suits weren’t allowed. It doesn’t take long for 56 degree water to render you unconscious, so we had to wait.”

The second week was no good either. 35 mile-per-hour winds created huge waves and churned up more cold water.

Then came Monday, July 31. The weather conditions weren’t great, but Tom and Greg deemed them good enough. In they went, stroking and kicking their way from Canada to the U.S.

The weather changed somewhere between shore and the half way point. The wind increased and was blowing from 12 to 21 miles-per-hour creating 4 to 5 foot waves.

“We were constantly looking out for the next wave,” explained Greg. “We would dive into or ride up and down each wave. If we didn’t time it right, it would push us back. All day we were battling the waves.”

Then, out of nowhere, came a duck. Floating an imposing 5 feet in height, it stared at the brothers as if daring them to continue.

“In the middle of Lake Erie we see this gigantic duck,” laughs Greg. “Thankfully, it was just inflatable. We tied it to the back of the boat and towed it the rest of the way.”

As Tom and Greg approached the shore, their body’s ached and the minds were taxed. They went into rest and recovery mode, swimming backstroke and taking it easy, hoping to take in the crowd as they neared land. Then a crew member from the accompanying boat informed them that they were very close to breaking the record for fastest time to cross Lake Erie. Reenergized, the brothers flipped over and finished strong, completing the swim in 11 hours, 15 minutes and 40 seconds, breaking the previous record by 60 seconds. 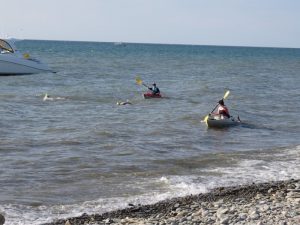 While their record setting swim was remarkable, there was a much more meaningful purpose behind this feat.

“Throughout the swim, mom was on our mind,” said Tom. “The ultimate goal was to do this for her. To give back to her. She was in our minds the entire time. All the struggles she went through while we grew up, hiding her disease so we didn’t worry. If she could do that, to be by our side from the time we were born to the time we finished this swim, then I think we both were excited to do this for her, get back to shore and give her a big hug.”

And that’s exactly what they did.

Tom and Greg set up a fundraising page as part of their swim and homage to their mom. So far they’ve collected nearly $7,000, all of which will support Arthritis Foundation programs and research. Learn more about their record setting swim or make a donation by going to their website!