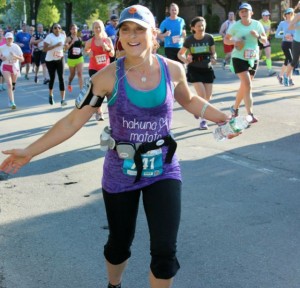 To look at her now, you’d never know that just a few years ago, Jill Konopka struggled just to open a jar of peanut butter.

“Literally, being able to twist open a jar by myself seemed like the biggest accomplishment,” recalls Jill. “I couldn’t even turn the shower head. It was humbling.”

A former Division III college athlete and current local news reporter, Jill was sidelined by a rheumatoid arthritis (RA) in her late 20s.

“I was shocked,” says Jill. “Here I was this young, active woman. Then one day I woke up and couldn’t get out of bed.”

Fast forward to 2015, and things look a lot different for Jill. Her steady regimen of medications, along with a healthy lifestyle, keep her RA under control. She’s even been able to return to her athletic pursuits. In fact, this November 1, Jill is running the TCS New York City Marathon as part of a team of runners who aim to raise awareness and funds for the Arthritis Foundation.

“I am so excited and proud to be part of the Arthritis Foundation’s team at the New York City Marathon,” says Jill. “At first my arthritis curbed my exercise, but now I actually feel better when I’m moving. I feel exhausted from training a lot of days, but it’s worth it to me to power through.”

Jill, whose sister and stepfather also have RA, will be running in honor of the nearly 53 million adults and 300,000 children who have arthritis.

“While there are some charity teams for runners seeking guaranteed entry to the race, we notice that Arthritis Foundation team members overwhelmingly have an affiliation with arthritis,” says Luci de Haan, regional vice president of marketing and communications for the Northeast Region of the Arthritis Foundation. “Either they have arthritis themselves or are running for a sibling, child, parent or friend with arthritis. Our team runners embody what it means to be Champions of Yes.”

The Arthritis Foundation’s goal is to have a team of 25 runners. There’s still time to register if you’re ready to be a Champion of Yes. Applications should be completed no later than September 15, 2015. For questions, please contact Bianca Roland at (212) 984-8705.

“So few people can say they have run the NYC Marathon,” says Jill. “To think you can cross this once in a lifetime accomplishment off your bucket list while supporting the Arthritis Foundation is an amazing thing!”