There are days when it’s impossible for 12-year-old Noah Jones to walk. Or feel like eating. Or doing anything else, for that matter. Then there are days when ‘impossible’ isn’t in Noah’s vocabulary. The days when the only thing he thinks about is getting on his BMX bicycle and riding with his friends, doing slides and jumps, wheelies and whips, twists and turns.

Doing bike tricks and stunts makes Noah happy – and it helps him forget, for the moment anyway, that he was diagnosed with juvenile rheumatoid arthritis (JRA) before he was 2. Ever since, the disease has affected him and his family in ways most people would find hard to imagine.

It all started more than a decade ago when Noah began having sporadic but increasingly regular fevers and rashes. He spent an entire day in the emergency room with an extremely painful, swollen knee. The next day Noah saw a pediatric rheumatologist. And a week later he was in surgery to drain cloudy fluid from his infected knee. The doctor injected a steroid and had to straighten out Noah’s leg, which the toddler couldn’t do on his own. He also determined that Noah’s inflamed leg was slightly shorter than the other.

This launched a new routine for the Joneses, including trips three times a week between their home in Ellwood City, Pennsylvania, to Children’s Hospital in Pittsburgh, at least an hour’s drive each way, where Noah had physical therapy sessions to help him walk again. Because his arthritis was so active, Noah’s treatment plan was aggressive; over the years he has been on numerous medications, including anti-inflammatories, steroids, methotrexate and biologics. He has endured 10 surgical procedures on both knees and one on his shoulder.

All things considered, Noah was doing pretty well until earlier this year. His mother remembers him limping off the school bus at the end of January, complaining that his big toe hurt. “I can’t stand it anymore!” he cried, yanking off his shoe. By the next morning, his foot was gigantic, and the inflammation soon spread to the other foot and both ankles. He was feverish every day and was too sick to celebrate his 12th birthday in early February. “Noah had a complete flare-up from the knees down,” says his mother, Jaime. “It was a very sad and hard time. The worst since he was first diagnosed.”

Besides the physical pain it causes, juvenile arthritis impacts families in ways many don’t realize. Having arthritis, getting regular shots and ‘being different’ can affect mental health and cause anxiety and depression. Then there’s the financial hardship. Even with good insurance, the co-pays can be hard to cover. ER visits, rheumatology appointments, gas to get there and back – it all adds up. Not to mention the toll it takes on family dynamics, schedules and careers.

“My medicine cabinet is filled with drugs that were barely used, but bought and paid for,” says Noah’s mom. “He was prescribed 10 different medications trying to relieve his pain in this latest flare. When they don’t work, it’s not like you can return them.”

Ever since his diagnosis, Noah and his family have found solace and support from the Arthritis Foundation. “If I have questions about medications, the Arthritis Foundation is there to help us. Anything I need, they’ve been there for me. They call and check on us.” Last summer, the Jones family received a scholarship to attend the Foundation’s National JA Conference. “We’re extremely grateful because we couldn’t have gone otherwise,” she says. “It was amazing, walking into a place where everybody understands what we’re going through. It was life-changing for our family.”

On June 4, Noah will be joined by his family and friends at the Walk to Cure Arthritis in Pittsburgh, where Noah is the local youth honoree. Since first walking the Walk and fundraising for the event a decade ago, Team Noah has brought in around $25,000 for the Arthritis Foundation, according to Jaime. “We need to discover new medications and find a cure,” she says. “Donations also help educate people, like we got educated, about something we never knew can affect kids.” 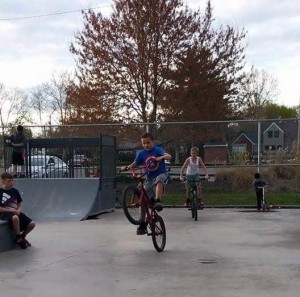 During the summer break, before he starts 7th grade, Noah is looking forward to the days when he’ll join his friends to pop wheelies, do bunnyhops and make up for lost time. He is adamant: “I love riding my bike and doing tricks. I get upset when I can’t.”