Major victory for Ohioans as the “lame duck” legislative session concluded!  On January 4, Governor John Kasich signed Senate Bill 265 into law. Ohio now joins 18 other states that have enacted laws that regulate the use of step therapy. With over 2.5 million Ohioans with doctor-diagnosed arthritis, this law will lead to a safer and more effective step therapy process for physicians and patients alike.

Step therapy is the process by which a health insurer can deny coverage of a prescribed medication, requiring that the patient first try a different medicine. The patient must “fail first” on a drug chosen by the insurer before they can receive the prescribed medication. For patients, this barrier to care prevents timely access to doctor prescribed treatments and can be the difference between full mobility and joint damage.

We would like to thank Senators Lehner and Tavares, as well as, Representatives Johnson 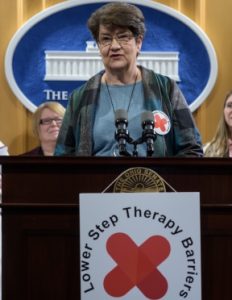 and Antonio for their years of championing the efforts for SB 56/HB 72. Also, thanks to Senator Dolan for inclusion of the step therapy protocols in SB 265.

Ambassador Nikki Domers recalls, “In June 2018, I proceeded to the Statehouse in 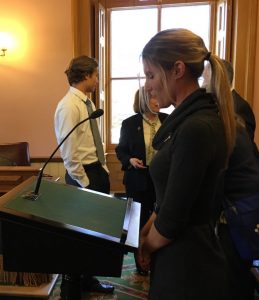 Columbus to advocate for the Step Therapy bill, for what felt like the hundredth time. This time though, instead of two or three meetings between the House and Senate, it was a marathon of meetings – I met with 13 Senators that day. The experience was unbelievable. I had time to talk to Senators themselves and I felt our story was finally heard, it was understood. I had one meeting last 40 minutes! It was no doubt a busy day, but it was worth it. This bill not only helps my daughter, but the millions of Ohioans living with chronic diseases. When bills like this pass, the meetings, the drive, all the calling and e-mails – makes it all worth it!”

Step therapy reforms included in this legislation will apply to health benefit plans issued or renewed on and after January 1, 2020. The bill’s requirements will also apply to the Medicaid program with some adjustments. Step therapy protocols utilized by insurers in our state will now be easier, safer, and more efficient, resulting in more positive health outcomes for all arthritis patients.

Click here to thank the bill sponsors for championing this important legislation!