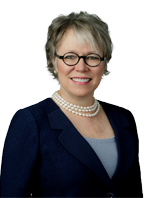 In her late 20s, Ms. Lappin was embarking on a promising legal career at a large law firm. Her career was taking off, she was newly married, and she was setting a foundation for a life time of career achievement and personal growth. This was interrupted when Ms. Lappin fell ill with crippling back pain. She went to a series of doctors, received a number of misdiagnoses, including one of bone cancer. Nine doctors later, she found out she had Ankylosing Spondylitis (AS). At the time, AS was thought to be a disease that only affected men. Of course the genetic understanding of this disease, which would correct this fallacy, was just unfolding. Although she was devastated, Ms. Lappin was able to find excellent care through her decade’s long relationship with a rheumatologist who became her partner in battling this illness. Eventually, in her mid-thirties, Ms. Lappin had to take disability, leaving the law firm and career she worked so hard for.  However, as this door closed a window opened in Ms. Lappin’s life. She found meaning and gratification through her increasing engagement as a volunteer leader with the Arthritis Foundation.

Calling upon her background in law and policy, Ms. Lappin chaired the national government affairs committee, leading the successful advocacy campaign to have an institute created at NIH with a primary focus on arthritis: the National Institute on Arthritis and Musculoskeletal Diseases. In the late 1980’s she joined the Board of Trustees; by 1996 Ms. Lappin became our national chair, leading the organization through the celebration of its 40th anniversary. During her tenure, the Arthritis Foundation entered into its first public private partnership with the NIH, contributing $1M to launch a $7 M federal investment in the North American Rheumatoid Arthritis Consortium, dedicated to identifying the gene(s) that triggered susceptibility to rheumatoid arthritis.

Volunteer work gave meaning to Ms Lappin’s journey and brought a valuable return to the Foundation. Ms. Lappin says “being involved with the Arthritis Foundation allowed me to create a new path forward in my life as I learned to live with a very serious disease. Never could I have imagined that one day I would be able to return to work and in doing so would draw on every experience I was offered as a volunteer with the Foundation.”

In 1999, Ms. Lappin began taking one of the first biological drugs brought to market and the change in her health was nothing short of the miracle everyone with arthritis hopes for. Ms. Lappin returned to the work force in 2000. Today, she is counsel to the law firm of Faegre Baker Daniels and leads the Health & Biosciences consulting practice at FaegreBD Consulting. She is dedicated to advancing health and science policy, with a large part of her practice dedicated to working with patient groups to advance their missions in relation to the NIH, the CDC and the FDA. She says, “I consider myself one of the most fortunate people alive. The work with the Arthritis Foundation over two decades gave me purpose, and allowed me to grow as an individual, despite the devastating illness that I was battling. Today and every day, I get to give back.”

Currently Ms. Lappin is the Arthritis Foundation’s representative on the Accelerating Medicines Partnership (AMP) which is a novel private-public partnership with the NIH, the FDA, 10 biopharmaceutical companies and multiple non-profit organizations. The purpose of AMP is to transform the current model for developing new diagnostics and treatments by identifying and validating promising biological targets for therapeutics. The ultimate goal is to increase new diagnostics and therapies for patients and reduce the time and cost of developing them. AMP focuses its efforts on three disease areas, one being autoimmune disorders of RA and lupus. We chose Ms. Lappin to represent us because she isn’t a scientist – she’s a real person with a real disease. Including the patient voice is vital in creating the next generation of diagnostic and treatment solutions. Her voice is the voice of our constituents, your voice!

We asked Ms. Lappin if she had any words of wisdom for someone newly diagnosed with arthritis. She said –