Arthritis Blog Home »  News Blog Home  » So, She Rode Her Bike Down the California Coast


Last September, Nancy Travis, the actress famous for leading roles in the film “So I Married an Axe Murderer,” the Fox TV show “Last Man Standing” and the Golden Globe-winning Netflix series “The Kominsky Method,” rode her bicycle from San Francisco to Los Angeles in support of the Arthritis Foundation.

“How hard could it be?” the spirited 57-year-old asked herself when she signed up in March 2018.“I read about the California Coast Classic in a magazine once, and thought, ‘Wouldn’t that be a cool thing to do?’” she recalls. “Plus, my mom suffered tremendously from rheumatoid arthritis, so I had a personal reason for wanting to do the ride. It was such a bonus that I could do this amazing thing and fundraise for the Arthritis Foundation at the same time.”

The goal of the annual bicycle tour is to raise over $1 million for the Arthritis Foundation. Funds raised help bring life-changing tools and resources to people living with arthritis; provide support to the 300,000 kids and teens with arthritis through the National Juvenile Arthritis Conference, JA camps and other educational activities; accelerate the path to better treatments and a cure; and break down barriers to optimal arthritis care.

Nancy had just a couple of challenges after registering for the 525-mile trip: She didn’t own a bike or ride regularly! 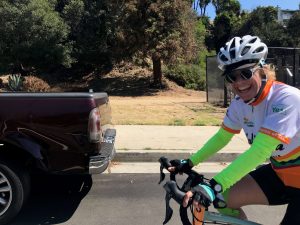 Shannon Marang Cox, ride director of the California Coast Classic (CCC), provided a helping hand. “Once I registered, Shannon gentled me into it,” Nancy says. “She answered all my questions, helped me connect with my local Performance Bicycle shop and introduced me to a CCC training ride in my area.”

Performance, which helped the Arthritis Foundation by promoting the California Coast Classic throughout their stores last year, outfitted Nancy with a Fuji bicycle and all the necessary gear, and the community of CCC veterans welcomed her — both online and in person.

“I joined a CCC training ride, and the people I met helped me learn to ride on the road and gave me lots of helpful advice, like why I should switch to clipless pedals,” she says.

Starting at Fisherman’s Wharf in San Francisco , the California Coast Classic is an eight-day bicycle tour that hugs California’s gorgeous coastline. Its riders are fully supported, meaning their luggage and gear are driven from stop to stop while they pedal a well-marked route at their own pace each day. At night, the riders enjoy catered gourmet meals together in camp and have the choice of sleeping in a tent or a nearby hotel room.

The daily distance of the CCC ranges from 50 to 85 miles, and there are food and water stations strategically placed along each day’s route, staffed by cheering and helpful Arthritis Foundation volunteers. If riders have mechanical problems, want a ride up a hill or just feel too tired to keep riding, people driving support vans, called “sag vehicles,” provide assistance or transport them. 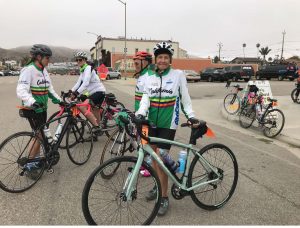 Participating in the ride helped Nancy pay tribute to her mother, Theresa, who was diagnosed with RA before she was born. “My mom lived in chronic, excruciating pain,” Nancy says. “Her arthritis was severe and debilitating, and she eventually lived in a wheelchair because her spine collapsed. There was a lot we could not do as a family, like go on a simple bike ride together. People with arthritis need support. It’s a chronic disease with no cure, no respite.”

While grinding out the miles of the CCC, Nancy thought about her good fortune in being healthy enough to ride a bike and enjoy the outdoors — but it’s still a big challenge to ride 525 miles.

“I knew for sure I could do Day One,” she remembers. “I wasn’t so sure about Day Eight! But I found myself constantly lifting my head and having these literally breathtaking views that kept me going, over and over and over again.” In the end, Nancy completed every single inch of the California Coast Classic on her bike, never utilizing the readily available support vehicles.

Aside from the scenery, another secret to Nancy’s success was becoming friends with other CCC riders. She found that she didn’t ride the same pace as some of the people she’d met originally, but by the second day, she ended up riding with two other women, and they quickly bonded and spent the rest of the week riding together.

“Everyone I met on the ride was very friendly and helpful. They were super welcoming,” Nancy says. “You really get to know people when you’re riding together for hours. We would talk and laugh and share our life stories. My advice to anyone who’s considering this ride is, ‘You can do it, and it will be a highlight of your life!’”

Nancy plans to ride the California Coast Classic again, but her filming schedule will prevent her from returning in 2019. In the meantime, she has continued to support the Arthritis Foundation as an honorary committee member of the 39th annual Champions for a Cure Gala, which will be held this October 27 at the Skirball Cultural Center in Los Angeles.