It’s been a stellar run for Matt Iseman thus far on The New Celebrity Apprentice! As many of you know, Matt is fighting for the Arthritis Foundation as his charity of choice and we couldn’t be more thrilled to have his support. You can check out previous highlights of Matt’s efforts thus far on our website, but in the meantime, let’s dig in to what happened this week!

The teams’ first assignment of the week was to market a new snack product for health-food brand Lorissa’s Kitchen. The teams were judged on audience engagement, brand messaging, and creativity of theme concept.

Taking the reins for Team Arete was Brooke Burke-Charvet, and for Team Prima, Lisa Leslie stepped up. The teams were both given a shipping container to create a publicity stunt near the beach to promote the snack. Both teams decided to leverage a fitness and healthy lifestyle theme – Brooke has a background in fitness so this was a natural fit. She took an educational and relatable approach and used her teammates strengths to her advantage. Although she wasn’t able to articulate her theme well, and told advisor Bob Harper she intended to “play it safe.” Without a whole lot of direction or clarity, Team Arete stepped up and was able to execute Brooke’s vision.

Boy George spoke about how he changed his lifestyle to include healthy eating and lost 70 pounds. Laila Ali talked to the crowds about her healthy lifestyle that includes fitness and healthy eating and Brooke used her background in fitness to lead a booty burn class – which Matt actively participated in!

Project manager Lisa decided to incorporate fitness into their theme after assuming Brooke would do the same. Although some team members did not agree, they forged ahead. Each team member had a “station” within the shipping container and Carson Kressley acted as the event MC. Vince Neil contributed to the team by suggesting they hire fitness models to dance on top of the shipping container. Team Prima’s presentation had a lot going on and didn’t appear cohesive.

In the boardroom, the advisors told Team Prima the client wasn’t impressed with their event and the fitness dancers were not on-brand. On the other hand, the client loved Team Arete’s fitness and family-friendly focus and they won the challenge by a long shot, which means Matt was safe and headed into the next challenge!

Lisa brought Chael Sonnen and Vince back to the boardroom and each explained their case. Ultimately, Vince was terminated for his fitness model idea.

The second challenge brought out the kid out in everyone – especially Matt! The teams were tasked with creating a digital brochure for Universal Studios Wizarding World of Harry Potter. Matt stepped up as the project manager for Team Arete and Carson volunteered for Team Prima. Matt is a huge Harry Potter fan, so he was more than up for the challenge. Matt decided to use the newspaper in the Harry Potter series – The Daily Prophet – as inspiration for his team’s brochure. The team took photos in the theme park, developed the theme of “The Magic is Real” and got to work. Although some team members thought this idea was too ambitious, they all worked hard to get it done. 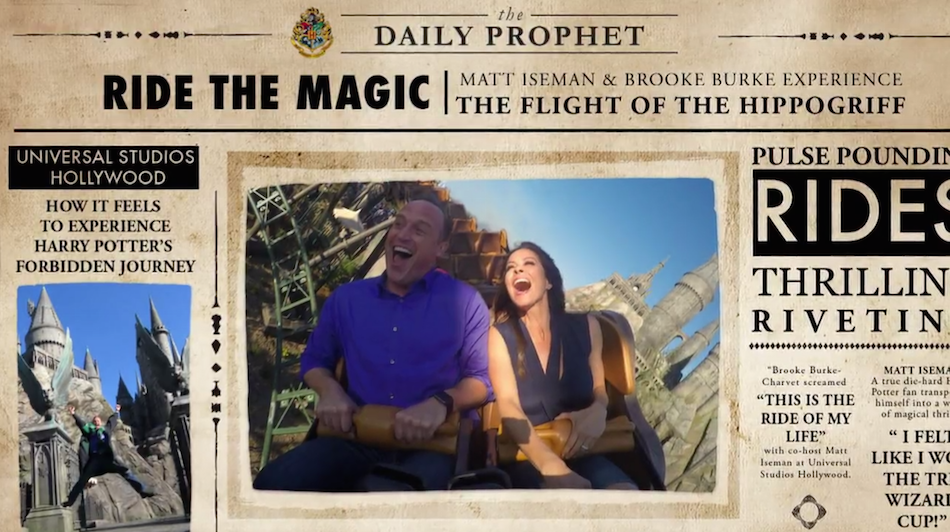 Team Prima’s approach was different, it had to be because none of the team members were very familiar with Harry Potter. Carson decided on a theme of “Harry Potter is the real celebrity” and he and Porsha Williams developed the creative for the brochure. Time got away from the team and with a few minutes left to complete the task they realized they might not finish. Without consulting any other teammates, Chael brought it upon himself to cut one of the power cords to cause a “technical difficulty,” giving his team more time to finish.

Both teams presented their final product at CityWalk Universal Studios in front of executives and Harry Potter fans. Matt showed his super-fan colors and spoke passionately and enthusiastically about Harry Potter and the brochure they developed based on The Daily Prophet. Carson presented his team’s brochure and unveiled their theme “Unlock the wizards in all of you.”

In the boardroom, Arnold poked fun at Matt’s love for all things Harry Potter, but also praised his enthusiasm. The Universal executives loved Matt’s idea of using The Daily Prophet. The executives, however, were not impressed with Team Prima’s creative or concept. Team Arete – and Matt – were declared the winners, bringing home another $50,000 for the Arthritis Foundation! 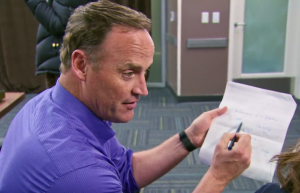 Matt is the only celebrity to have won two challenges so far and we couldn’t be more proud of him. We are honored to be the recipient of his TWO challenge wins – a total of $100,000 to support our mission and research work.

After the win, things got interesting on Team Prima. Arnold asked Chael to explain the power outage and he did – he told Arnold he cut the power on purpose to give his team more time because he knew a technical difficulty would allow them the time the needed. That did not go over well with Arnold – Chael was promptly terminated and Arnold announced he doesn’t tolerate cheaters in his boardroom and someone else would be going home for their performance. Down to three players, Carson, Porsha and Lisa – the team explained who did what and what went wrong. Ultimately it came down to Porsha’s inability to tell Arnold who should go home. She was terminated, and Carson and Lisa will continue on to see another challenge.

We are so happy that Matt is not only still in the competition, but is thriving. We can’t wait to see where he goes. Catch the next episode of The New Celebrity Apprentice Monday at 8/7c, and find out more about Matt’s involvement with the Arthritis Foundation and support him as he supports our fight!