Mark Harding, founder of Gran Fondo Guide, North America’s largest cycling events site, commented: “Every year we recognize and reward those rides that have innovated, achieved, inspired and encouraged cyclists, supported worthy causes and contributed to the growth of cycling.”

“Recently, we have seen an increased interest in charity rides, especially multiday events. We considered several factors in choosing the Best Charity Bike Tour, including ride organization; social, community and training aspects available to participants leading up to the tour; participant support during the tour; overall challenge and route selection; and dedication and funds raised by participants.”

June kicks off the California Coast Classic’s biggest month for fundraising, as the team has many different challenges for participants who can win coveted prizes or fun extras during their week on tour. 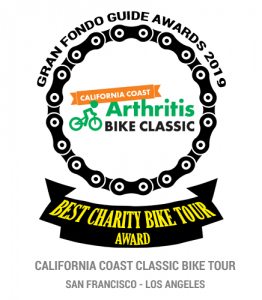 Now in its 19th year, the California Coast Classic will begin this year’s journey from San Francisco’s famous Boudin Bistro at Fisherman’s Wharf on Saturday, September 21, 2019. Riders will embark on an eight-day, fully-supported tour down the coast of California’s famous Highway 1, with stops along the way in Santa Cruz, Monterey, Big Sur, Cambria, Oceano, Buellton and Ventura — and will cross the finish line in Los Angeles on September 28. During the tour, riders are greeted by honorees who share what their life is like with arthritis and how fundraising helps people with arthritis live their best lives.

Participants pay a registration fee and are required to raise a minimum of $3,500, though most riders raise an average of $5,000, making it among the Arthritis Foundation’s biggest fundraisers. This year’s tour is expected to sell out — but a limited number of spots are still available for those interested in joining.

“CCC is a bucket list ride, but many of our cyclists have been participating for many years,” says Shannon Marang Cox, ride director for the CCC Bike Tour. “They come back for the camaraderie, the gorgeous scenery, the amazing food and support, as well as the chance to make a difference in the lives of 300,000 children and 1 in 4 adults with arthritis.”

To donate, find out more about the event or register for the 2019 ride, please visit arthritis.org/CaliforniaCoastClassic.