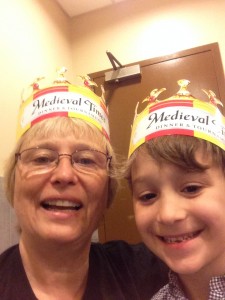 Diagnosed with fibromyalgia in her 30s and then osteoarthritis (OA) in her 50s, pain has been a pretty consistent factor in Laurie Steiner’s adult life. But, as an active grandmother and frequent caretaker of seven grandchildren, Laurie doesn’t have the time to let the pain keep her down.

“I have a busy life, like most women,” says Laurie. “I watch several of my grandkids, which involves a lot of lifting, as well as getting down and dirty with them when we play together. I may have fibromyalgia and arthritis, but I can’t let it keep me from the things I love.”

In treating her pain, Laurie has been diligent in avoiding certain pain medications in fear that they will make her too tired to make it through the day.

“I have tried to stay away from taking anything narcotic for my pain,” says Laurie. “I really can’t take them because I have to be alert for the babies. Many of the medications for pain just make me tired and knock me out.”

At the advice of her internist, Laurie turned to massage to help her manage her pain and stiffness. While it might sound counterintuitive to have someone put pressure on parts of your body that hurt, massage is actually one of the most popular complementary therapies used by Americans, according to the National Center for Complementary and Alternative Medicine (NCCAM), part of the National Institutes of Health.

Tiffany Field, PhD, director of the Touch Research Institute at the University of Miami School of Medicine, has conducted a number of studies on the benefits of massage, including on people with arthritis. In Field’s research and other recent studies on the effects of massage for arthritis symptoms, regular use of massage therapy led to improvements in pain, stiffness, range of motion, hand grip strength and overall function of the joints. Although Laurie once considered massage therapy to be an indulgence, she now calls it a lifesaver.

“Massage is the one therapy that, unlike some medicines, is safe but also very effective at relieving stiffness in my muscles and tightness in my joints,” says Laurie. “Sometimes, I literally hobble in for a massage and then walk out feeling ten feet tall.”

Having just returned from a camping trip to Maryland’s Assateague Park, Laurie credits massage for helping her do the things she loves, like fishing, crabbing and spending time with her growing family.