It’s a fact that more than 54 million Americans have some form of doctor-diagnosed arthritis. But it’s estimated almost twice that number may suffer from the disease — if you also include those who have symptoms consistent with arthritis but haven’t been diagnosed.

Want to know more arthritis facts? We are unveiling the fourth annual edition of Arthritis by the Numbers! Each new edition has featured improvements and new facts. We started in 2017 with over 200 facts about eight of the most common forms of arthritis. The first edition was reviewed by almost a dozen doctors and researchers.

In 2018, we made one of our most significant changes, adding the most important voices: our patient reviewers. These voices have continued sharing information that serves a large audience, including families and patients, researchers, advocates and industry leaders. This edition included more than 500 facts about 12 common forms of arthritis and rheumatic diseases, as well as sections about three juvenile forms and nine adult forms of arthritis.

The 2019 edition grew to include about 700 facts about 15 common forms of arthritis, including sections about five juvenile forms and 10 adult forms of arthritis. In this edition, patient reviewers shared their experiences about how these facts touched their lives. We also added a short summary of Arthritis Foundation research history.

The 2020 edition includes well over 800 facts about 15 common forms of arthritis, but in a new format. Unlike previous editions, this year’s Arthritis by the Numbers covers the facts in a narrative form and includes more patient-impact stories. We’ve also included some of the preliminary results from the Arthritis Foundation’s Live Yes! INSIGHTS program, which has collected more than 18,000 patient responses to questions about physical health, social and mental health, and better ways of communicating and relating to the health care system.

This collection of assessments resulted in more than 1.7 million patient-reported data points during 2019. The data told us that most arthritis patients suffer from pain and fatigue on a regular and ongoing basis. This information, one of the world’s largest collections of patient-reported outcomes, tells a larger story that supports research facts contained in the 2020 edition of Arthritis by the Numbers. Patient-reported facts take us to the next level. You can read more about the first year of data collected through the Live Yes! INSIGHTS program in A Mandate for Action: A First Look at the Arthritis Foundation’s Live Yes! INSIGHTS Findings.

Click to get the facts and check out the new 2020 Arthritis by the Numbers! 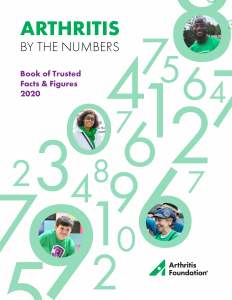