Each summer as school lets out and the weather starts to get warmer, there’s an excitement in the air felt all the way from Long Beach, California to the shores of Long Island, New York. There are always good reasons to be excited for some time off, but for many children, teens, young adults and their families affected by juvenile arthritis and related rheumatic diseases – the Arthritis Foundation’s National Juvenile Arthritis Conference has become the summer event to look forward to.

Over two long weekends in late June and early August, more than 1,800 attendees made their way to Seattle, Washington and Washington, DC to take part the 2018 JA Conference. As done in previous years, the Arthritis Foundation hosted two JA Conference locations to serve even more kids, families and young adults affected by childhood rheumatic diseases across the country, while also welcoming home returning veteran families.

In both cities, more than half of conference participants were first time attendees to the JA Conference, experiencing everything the four-day conference had to offer. Kids and teens were treated to their own specialized programming including peer-led activities, educational sessions and fun social happenings. At the same time, parents choose their own breakout sessions throughout the day – from disease-specific sessions hosted by top doctors and health care experts to topics such as educational rights in schools and transitioning from adolescent to adult medicine. This year, we also live-streamed two of our most popular sessions for those that were not able to join us in person. 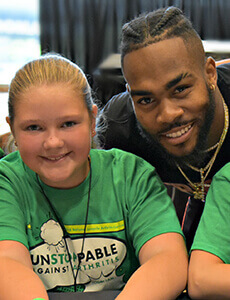 Young adults ages 18-25 also participated in their own program throughout the weekend, covering subjects such as mental health and wellness, relationships and patient engagement strategies. Guided by two volunteer leaders, young adults were also able to participate in panels and speak to parents and teens, giving a positive glimpse into their own futures. The YA group planned their own social activities and had a “night in” to hang out and network amongst their group.

NFL football player Charcandrick West made a special appearance at the conference in Bellevue, Washington, visiting with the kids and teens, signing autographs and sharing his story. Charcandrick was diagnosed with juvenile arthritis when he was a teenager yet has overcome the odds to pursue a successful career as a dynamic running back for the Kansas City Chiefs. Charcandrick is also the first spokesman of the Arthritis Foundation’s new cause campaign, Let’s Get a Grip on Arthritis. 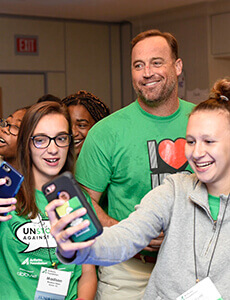 Matt Iseman, doctor, comedian, actor and current host of NBC’s American Ninja Warrior made a special appearance in Washington, DC. In 2017, Matt competed on The New Celebrity Apprentice and won – benefiting the Arthritis Foundation as his chosen charity. Through Matt’s own experiences being diagnosed with rheumatoid arthritis, Matt easily connects with conference attendees from toddlers to teens and anyone else he meets.

For the first time this year, a special award was presented to – and named in honor of – Steve and Liz Smith for their 20 years of volunteer service to the JA Conference and JA community. The Steve and Liz Smith JA Conference Legacy Award will be awarded annually to the parent or parents who have made a lasting impact on the Arthritis Foundation and the JA community through their involvement in the JA Conference. They have been involved in this conference for five or more years, playing a critical leadership role in planning and/or onsite support. 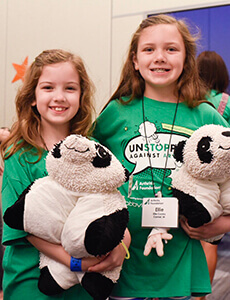 Special thanks to National Presenting Sponsor, AbbVie; Supporting Sponsors, Novartis and Alpha Omicron Pi Fraternity and Foundation as well as all the exhibitors and in-kind donors.

Save the dates for the 2019 JA Conference locations. We hope to see you there!