Health care laws and policies are keys to whether millions of Americans with arthritis get the care they need to manage their disease and live their lives to the fullest. For some, it can mean the difference between walking and a wheelchair, employment and disability, even life and death.

And although the U.S. Congress is at an impasse, states’ legislatures are taking action to protect and promote access to care and medications – including those for people with arthritis.

“With the gridlock in Congress, it could take years for federal legislation to move on many of the issues related to access to medications and care,” says Mark Guimond, director of state legislative affairs for the Arthritis Foundation. “States are not waiting. Some states can consider and enact a new law in just a few short months.”

So why does state legislation carry so much weight? For starters, most of the specifics of health insurance plans are governed by state law, so the laws in your state directly affect your access to care. For example, state laws define out-of-pocket drug costs and whether insurance covers an adequate network of health care facilities and doctors.

That is why the Arthritis Foundation and its volunteer advocates regularly work with state legislators and policy makers. The Foundation helps identify challenges, and volunteers share first-hand experiences. Together, they create a compelling lobby for the 52 million adults and 300,000 children in the U.S. with doctor-diagnosed arthritis.

“Using our motivated volunteer advocates to serve as citizen lobbyists is giving us the power to enact laws in state after state that limit the out-of-pocket costs on medications, reduce wait times for insurers to authorize specialty medications and many other benefits,” says Guimond.

Following are key issues the Foundation is fighting for at the state level to help people with arthritis afford medications and get the treatments they need. 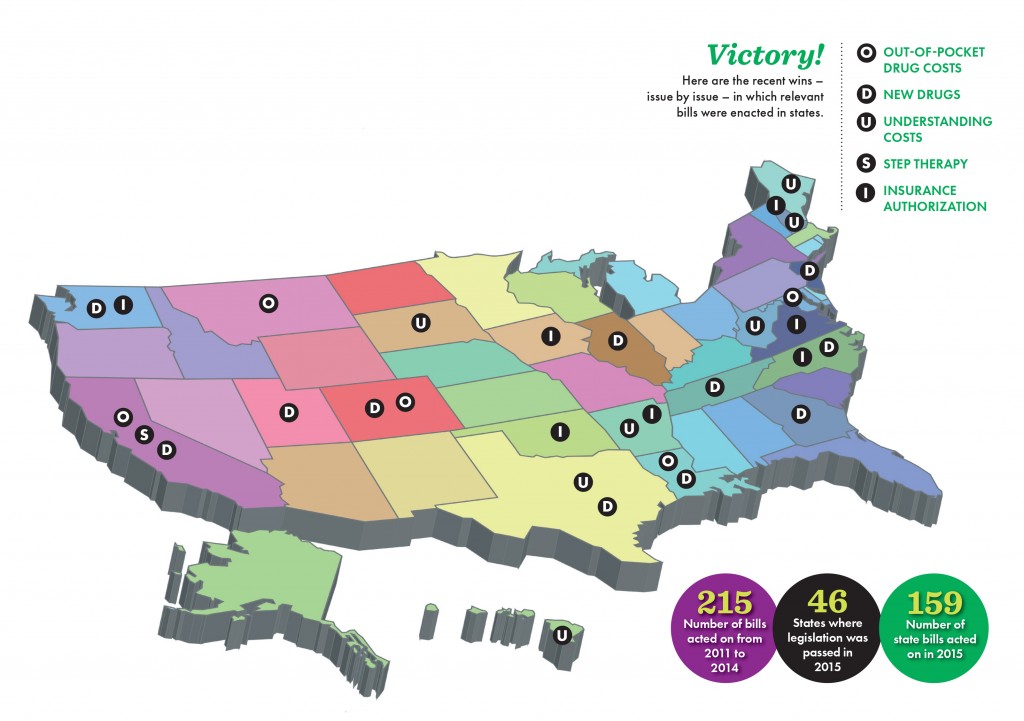 Insurance companies are implementing “specialty tiers” – a category in their drug formulary that shifts a greater proportion of the costs of expensive drugs, such as biologics, to patients. What’s more, many people with arthritis have additional conditions for which they need medication.

Why it’s important: This can add up to hundreds of dollars out of pocket every month – and even more in the first months of an insurance plan’s year for those trying to meet their deductible. The expense can potentially push some patients to go without critical medications.

Advocacy action: The Foundation is backing legislation to cap monthly co-insurance expenses and spread deductible costs over the year. The legislation would divide the deductible cost into, for example, 12 equal payments. In another option, it would limit the co-pay or co-insurance per medication to $150 per month. These measures could especially help patients struggling to come up with the full deductible and co-pay all at once.

A new generation of drugs based on existing biologics, known as “biosimilars,” is making its way to the U.S. marketplace.

Why it’s important: These drugs are expected to improve access to life-changing medications. But unlike synthetic generic drugs, biosimilars are developed from proteins in living cells. This makes them more complex and difficult to replicate.

Advocacy action: The Arthritis Foundation is a member of an important coalition focused on ensuring patients’ access to biologics and biosimilars, and ensuring biosimilars have distinct names to prevent confusion. It also is working to ensure that a doctor can prescribe a biologic rather than a biosimilar, when appropriate, so insurance companies do not make treatment decisions.

Patients shopping for health insurance can review an insurance plan on the company’s website, which typically shows whether a medication or service is covered. What isn’t shown is what the patient will actually pay.

to find out whether a plan covers the therapies they need, their out-of-pocket costs and how the coverage compares in other plans.

Advocacy action: The Foundation supports legislation requiring a “window-shopping approach” for patients to compare costs based on their conditions and treatments. This apples-to-apples comparison of plans and drug costs lets people make informed decisions when buying insurance.

Insurers commonly require patients to try cheaper drugs before approving a more expensive prescribed medication. That may happen if the patient switches insurance plans or the insurer changes its prescription coverage.

Why it’s important: A patient’s condition might worsen while trying a drug that isn’t as effective as one that’s been proven to work.

Advocacy action: The Foundation supports legislation that puts limits on these policies, restricting them to time limits and allowing a physician to override them, so a patient can stay on a medication that works.

Insurers often take an unreasonable period of time to review a prescribed treatment before approving certain specialty drugs for a patient.

Why it’s important: This prior authorization delays treatment, potentially allowing the condition to worsen and putting the patient at risk. Some policies allow up to 15 days for preauthorization, and up to three days for life-threatening and emergency treatments. Even then, the insurer still could deny it, creating more delays and risks for the patient. And although a patient may appeal the denial, some appeals can be long and arduous and further delay treatment.

Advocacy action: The Foundation supports legislation that requires shorter, more reasonable review periods and less administrative burden for a patient to get approval for their medication or treatment.

In some cases, people buy insurance plans and then find that it has a “narrow,” or inadequate, provider network. That can happen if, for example, listed doctors aren’t taking new patients, specialists are not in the plan’s network or the nearest in-network hospital is hours away.

Why it’s important: Without ready access to doctors and hospitals, patients may be forced to use out-of-network providers at a much higher cost.

Advocacy action: The Founda­tion is fighting this new battle to ensure that people with arthritis have timely, qualified and geographically accessible care from an adequate number of doctors, facilities and services that are appropriately covered by their insurance plan. It is working with coalition partners to develop language that can be presented to states for adoption.