On Monday, Danielle Highley of Deer Lodge, Montana, and her mother flew over 2,200 miles to Washington, D.C. with Montana Sen. Steve Daines to attend today’s State of the Union address. Sen. Daines invited Dani, age 9, and her mother, Glory, to join him after he told Dani’s story on the floor of the U.S. Senate earlier this month, urging his colleagues to support long-term CHIP funding.

CHIP, the Children’s Health Insurance Program, was created over two decades ago with overwhelming bipartisan support. The program insures vital health care for nearly 9 million children across the country. In September 2017, Congress allowed funding to expire, and the program was in danger of ending coverage for those children. Last week, Congress extended funding to CHIP for six years.

END_OF_DOCUMENT_TOKEN_TO_BE_REPLACED

My name is Ethan Berkovitz, I am a 16-year-old high school sophomore  and my favorite sports are soccer and futsal, a type of indoor soccer with five players per team.  I play on the U.S. Youth Futsal 16-and-under National Team, and this summer I got to compete and represent our country in Costa Rica.  I have been playing soccer since I was 3 years old – and I have juvenile arthritis.

I didn’t always have juvenile arthritis. It all started when I was 8 years old,  when I started having pain in my legs, hands and wrists. I thought I was having growing pains, but it got worse and worse in just a few short months. I couldn’t even walk down the stairs, or to the bus stop, so my dad had to carry me.  Sometimes, I didn’t make it to school because I didn’t feel very well and I would get fevers, so I felt really sick.  I loved playing all kinds of sports back then with my friends and I was on lots of different teams.  I also would ride my bike, skateboard, rollerblade and much more.

END_OF_DOCUMENT_TOKEN_TO_BE_REPLACED

Arthritis is not just your grandparent’s disease, and at this year’s Advocacy Summit, our young participants will tell Members of Congress that kids get arthritis, too!

On March 6 and 7, more than 400 people affected by arthritis from all across the country will convene in Washington, DC, as part of the Arthritis Foundation’s 2017 Advocacy Summit.

Attendees will include an estimated 100 kids and teens who will participate in a special Kids and High School Summit track. Uniquely designed for kids/teens who are affected by juvenile arthritis and childhood rheumatic diseases, this track includes interactive activities that will empower them with the skills and confidence they need to raise awareness for the arthritis community, young and old, and help change perceptions of this disease. Then they will meet with Members of Congress, educating them about barriers to health care and motivating them to consider all people who live with arthritis when they design health care legislation.
END_OF_DOCUMENT_TOKEN_TO_BE_REPLACED

School is out, so now what do you do to engage your kids? On June 29, a number of parents took their families to Harrisburg, PA, to participate in the 2016 Pennsylvania Advocacy and Access Day. Some of the youth were already pros having attended previous advocacy days and our Advocacy Summit in Washington, DC. For others it was a first time experience.
END_OF_DOCUMENT_TOKEN_TO_BE_REPLACED 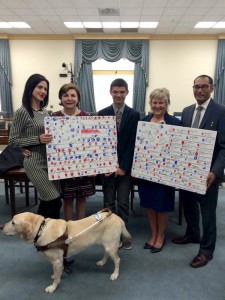 This week, the Arthritis Foundation, alongside the American College of Rheumatology (ACR) and the National Psoriasis Foundation (NPF), advocated for the arthritis community on Capitol Hill by raising awareness concerning the shortage of pediatric rheumatologists across the country and the difficulties families face in obtaining treatment for juvenile arthritis.

Acting as moderator of the presentation, AF CEO Ann Palmer initiated the meeting with Hill staffers by focusing on the lack of pediatric rheumatologists in the United States; she also offered an anecdote from the JA Conference in July where children expressed their desires to plead to members of Congress for their assistance obtaining improved access to doctors in order to feel less pain and to help find a cure for JA.

END_OF_DOCUMENT_TOKEN_TO_BE_REPLACED 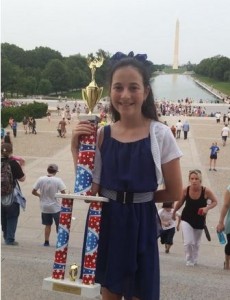 nonprofit organization that collects and distributes entertainment items for kids – including DVDs, gaming consoles, magazines and books – to hospitals and Ronald McDonald Houses all over the country in an effort to “help sick kids feel better one smile at a time.”

Kayla came up with the idea for Kayla Cares 4 Kids after extended hospital stays of her own, in addition to her 9-year-old brother Ethan’s numerous hospital trips due to chronic illness.  Kayla and Ethan both have Crohn’s disease and juvenile arthritis; Ethan also has eosinophilic esophagitis, gastritis and gastroparesis, and uses a feeding machine.

When Kayla Cares 4 Kids started in March 2013, Kayla’s original goal was to collect 100 DVDs to donate to Miami Children’s Hospital, but a newspaper article about her in the Palm Beach Post brought in an overwhelming response of donations.  The organization has grown tremendously – with more than 6,500 DVDs, books, video games and electronics donated to hospitals, medical facilities and Ronald McDonald Houses in 40 states!

Just this week, Kayla won the Young Entrepreneurs Academy Saunders Scholars competition at the America’s Small Business Summit in Washington, DC! While there, she also met with U.S. Reps. Patrick Murphy and Louis Frankel on Capitol Hill to advocate for arthritis. Kayla and her mother, Andrea, have been strong Advocates for arthritis and involved with the Arthritis Foundation for the past few years. Kayla will be attending the Juvenile Arthritis Conference this July.

To get involved in Kayla Cares 4 Kids, visit www.kaylacares4kids.org.